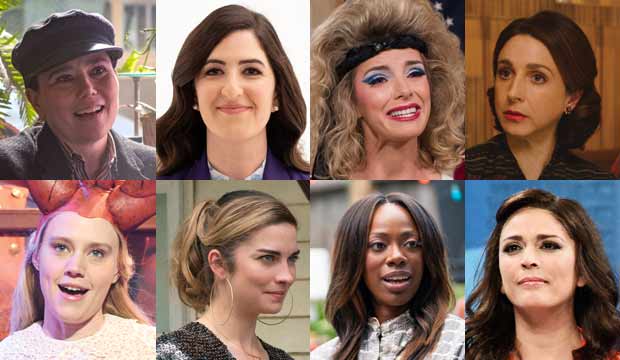 This year’s Comedy Supporting Actress race finds four first time nominees facing off against two past winners of the category and two previous nominees. We have watched every episode submission from these actresses to weigh the pros and cons of their episode choices. Who will walk away with the Emmy on Sunday, September 20? Follow the links to each episode analysis below and log your final Emmy predictions!

This is Alex Borstein’s seventh nomination. She has won this category for her role on “The Marvelous Mrs. Maisel” for the past two years in a row. She was also nominated in Animated Program as a producer on “Family Guy.” That show garnered her three nominations in Voice Over Performance, which she won in 2018. Borstein has submitted the episode “Marvelous Radio” for consideration: Susie has increasingly bad luck gambling. Sophie debuts on Broadway to terrible reviews, causing Susie to angrily confront her about destroying her one chance to be a serious actress.

This is Carden’s first career Emmy nomination! The actress has submitted the episode “You’ve Changed, Man” for consideration: Janet conjures up the real Timothy Olyphant to placate Judge Gen while the friends try to save Earth from her wrath.

This is Betty Gilpin’s third consecutive Emmy nomination for playing Debbie Eagan on “GLOW.” This year, she has submitted the episode “A Very GLOW Christmas” for consideration: the relationship between Debbie and Tex starts to unravel when she realizes he only wants to use her for business dinners. She helps to sober up Bash for his role and later pushes him to outbid Tex on the TV station. She wants Ruth to be the director for a new GLOW show.

This is Marin Hinkle’s second consecutive Emmy nomination for playing Rose Weissman on “The Marvelous Mrs. Maisel.” She has submitted the episode “A Jewish Girl Walks into the Apollo” for consideration: Midge (Rachel Brosnahan) salvages a potentially disastrous club grand opening with her impromptu performance. Susie asks Joel to be the finance manager for Midge since she can no longer be trusted. Midge is shocked to find out she has top billing at the Apollo Theater over legendary comic Moms Mabley. She almost outs Shy Baldwin during her performance.

This is Kate McKinnon’s eighth Emmy nomination. She has earned seven Comedy Supporting Actress nominations for “Saturday Night Live,” winning twice in 2016 and 2017. She also has an Original Music and Lyrics nomination for the “SNL” song “Home for the Holidays (Twin Bed).” McKinnon has submitted the episode “Host: Daniel Craig” for consideration: In this final in-studio episode, McKinnon plays Laura Ingraham on Fox News, a gambler opposite James Bond, a woman at a game night party and a soap opera star in the age of COVID-19.

This is Annie Murphy’ first Emmy nomination! The actress has submitted the episode “The Presidential Suite” for consideration: Alexis and Ted have an emotional yet somewhat cruel break-up to their relationship. She is putting the love for her career and family ahead of the romance.

This is Yvonne Orji’s first Emmy nomination! The actress has submitted the episode “Lowkey Lost” for consideration: Molly (Orji) and Andrew attend a work happy hour. They return to her place but she wants to take a nap instead of being with him. Later, Issa and Molly divide up in looking for a missing Tiffany. Andrew and Molly talk later at his apartment but don’t seem to be on the same page. Issa and Molly meet at an Ethiopian restaurant and have a real talk for the first time in a long time.