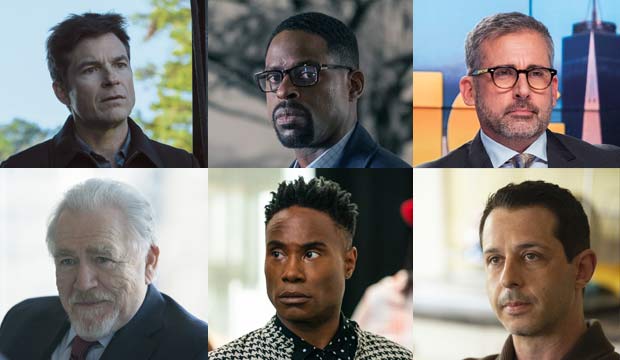 Last year’s reigning champ faces down a TV father/son team and several Emmy favorites in the race for Drama Lead Actor. We analyzed every submission from this set of nominees so we could weigh the pros and cons of each episode. Who will take home the gold on Sunday, September 20? Follow the links to each episode analysis below and log your final Emmy predictions!

Jason Bateman is a ten-time Emmy nominee. He was nominated twice in Comedy Lead Actor for “Arrested Development.” “Ozark” has earned him a total of three Drama Lead Actor nominations, two Drama Directing nominations (winning last year), and two Drama Series nominations. This year he is also nominated in Drama Guest Actor for “The Outsider.” For his Lead actor bid, Bateman has submitted the episode “Su Casa es Mi Casa” for consideration: Marty and Wendy give up information about their illegal actions during therapy. Marty then moves out. Navarro operatives watch over the family while they are under surveillance.

Sterling K. Brown, “This is Us”

Sterling K. Brown is a seven-time Emmy nominee. He is also nominated this year in Comedy Supporting Actor for “The Marvelous Mrs. Maisel.” Brown has three previous nominations for “This is Us,” as well as single nominations for “American Crime Story” and “Brooklyn Nine-Nine.” He won his bids for “American Crime Story’ and Season 1 of “This is Us.” The actor has submitted the episode “After the Fire” for consideration: a therapy session offers a look at the life of Randall as if his father Jack had never died in a fire. In this alternative timeline, Randall is angry that his mother had met his biological father William many years ago and didn’t tell him. He and Jack travel to Philadelphia to meet William for the first time.

This is Steve Carell’s tenth Emmy nomination. He has sixth previous Comedy Lead Actor bids for “The Office.” His work as a producer on that series earned him an additional three nominations for Comedy Series. Carell has submitted the episode “Lonely at the Top” for consideration: a flashback shows Mitch stressing over his 50th birthday. He has Chip move Mia over to Alex’s team after their affair has ended. Alex and Mitch travel to Las Vegas to cover the shootings, and he asks for junior booker Hannah to be on the trip. Later in New York, he buys her silence over their sexual encounter by promoting her to the top booker job.

This is Brian Cox’s third Emmy nomination. He won Movie/Mini Supporting Actor for “Nuremberg” and was also nominated in Comedy Guest Actor for “Frasier.” The actor has submitted the episode “Hunting” for consideration: Logan wants his company to buy rival PGM but his daughter Shiv does not approve. He is furious when he learns that someone disclosed information about him to an editor writing his biography. When he finds out PGM knows about his plans, he enacts a humiliating game of “Boar on the Floor.”

This is Billy Porter’s second Emmy nomination. He won this category last year for playing Pray Tell in “Pose.” The actor has submitted the episode “Love’s in Need of Love Today” for consideration: Pray Tell is hospitalized after a bad reaction to AZT and has unexpected visitors. Blanca tells the cabaret audience she is HIV-positive before performing with Pray Tell on the episode’s title song by Stevie Wonder.

This is Jeremy Strong’s first Emmy nomination! The actor has submitted the episode “This is Not for Tears” for consideration: the family spends holiday time on their yacht in the Mediterranean following Senate testimony. Logan asks his son Kendall (Strong) to convince Naomi to leave and she informs him that his father favors him only as a broken man. Logan approaches his son about taking the fall for the family. Later Kendall betrays him at a New York press conference.