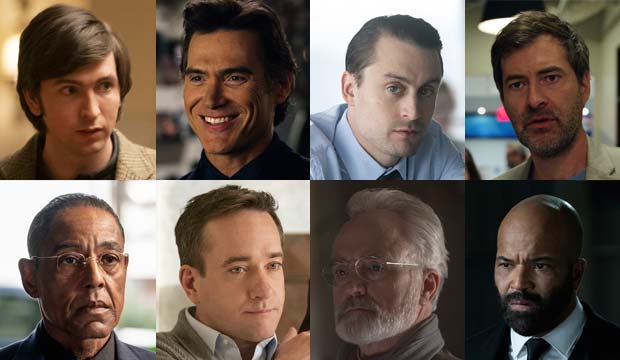 Four first time Emmy nominees contend against three previous winners and one previous nominee in the Drama Supporting Actor race. We’ve watched every submission to analyze the pros and cons of each episode. Which of these men has a killer tape to help them win an Emmy on Sunday, September 20? Follow the links below to each episode analysis and make your final Emmy predictions!

This is Nicholas Braun’s first Emmy nomination. He has submitted the episode “This is Not For Tears” for consideration: Cousin Greg must testify before the Senate about sexual misconduct and botches his answers. Later Kendall betrays his own father Logan at a New York press conference while Greg helps provide the documents that will prove his guilt.

This is Billy Crudup’s first Emmy nomination. He has submitted the episode “Chaos is the New Cocaine’ for consideration: Cory sees the bombshell announcement about Bradley joining as the show’s co-anchor as an opportunity to reinvent the program. He wants her to start the following Monday, not giving the team much time to prepare.

This is Kieran Culkin’s first Emmy nomination. He has submitted the episode “Tern Haven” for consideration: Roman is pretending that he actually reads books, but nobody is buying it. Tabitha tells everyone that she and Roman never have sex. Later on, that is proven when he implores her to pretend like she is dead in bed but she flees to the bathroom. He goes off to find Gerri instead.

This is Mark Duplass’ second Emmy nomination. He won Outstanding Documentary or Nonfiction Series for “Wild Wild Country” in 2018. Duplass has submitted the episode “The Interview” for consideration: Alex is given co-host approval so she will throw her support behind firing Chip (Duplass). Chip wants Bradley to smuggle Mitch onto the set to do his interview live. Chip and Mitch argue over the interview being called off after a death shocks the whole team.

Giancarlo Esposito is a four-time Emmy nominee. He was nominated in this category for playing Gus Fring on “Breaking Bad” in 2012 and on “Better Call Saul” in 2019. This year, the actor is also nominated in Drama Guest Actor for “The Mandalorian.” Esposito has submitted the episode “JMM” for consideration: Gus gives updates to Madrigal’s CEO Peter and to Lydia and Peter about the meth lab. Gus and Nacho set fire to the restaurant Los Pollos Hermanos.

This is Matthew Macfadyen’s first Emmy nomination. He has submitted the episode “This is Not For Tears” for consideration: Tom admits his unhappiness to Shiv about their relationship. Father-in-law Logan wants Tom to take the fall for the family and become their scapegoat. Logan ultimately decides Kendall will take responsibility, but that all changes at a New York press conference.

This is Bradley Whitford’s seventh Emmy nomination. He earned three consecutive Drama Supporting Actor nominations for “The West Wing,” winning in 2001. Then he had two consecutive Comedy Guest Actor nominations for “Transparent,” winning in 2015. He won the Drama Guest Actor for “The Handmaid’s Tale” in 2015, and is bumped up to the Supporting race this year. Whitford has submitted the episode “Sacrifice” for consideration: Putnam and Calhoun visit Commander Lawrence (Whitford) as “a voice of reason and restraint.” He quietly tells June about the fate of the Waterfords and tells her she got away with murder. Later, his wife Eleanor almost overdoses on medication, but June decides not to help her survive. Eleanor’s funeral service is held quietly.

This is Jeffrey Wright’s fourth Emmy nomination. He won Movie/Mini Supporting Actor for “Angels in America” in 2004. He has now been nominated for all three seasons of “Westworld,” moving from the Drama Supporting Actor category to Drama Lead Actor category, and back. Wright has submitted the episode “Crisis Theory” for consideration: Bernard survives fighting William and is given a package to deliver to an unknown address. It turns out to be Arnold’s widow, and he bonds with her over Charlie’s death. He realizes they have been delaying the collapse of society and then later returns from the Sublime into his body.