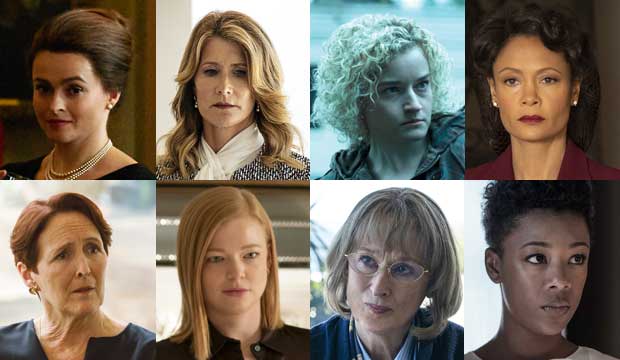 The Emmy race for Drama Supporting Actress features four women in roles they previously won for, a first time nominee, and acting legends. We have sifted through every actress’ submission to analyze the pros and cons of their episodes. Who has the episode that will help them take home the Emmy on Sunday, September 20? Follow the links below to each episode analysis as you consider your final Emmy predictions.

This is Helena Bonham Carter’s fourth Emmy nomination. She was previously nominated for “Merlin,” “Live From Baghdad,” and “Burton and Taylor.” The actress has submitted the episode “Cri de Coeur” for consideration: Princess Margaret consoles her sister Queen Elizabeth II that she shouldn’t have self-doubt or blame over the current state of England. The eventual divorce of Margaret and Tony will set a royal precedent. She almost overdoses on anxiety pills and is supported by her sister and chastised by the Queen Mother.

This is Laura Dern’s eighth Emmy nomination. She was previously nominated for “Afterburn,” “Fallen Angels,” “Ellen,” “Recount,” “Enlightened,” and “The Tale.” She won an Emmy for “Big Little Lies” in the Limited/Mini Supporting Actress category. Dern has submitted the episode “Tell-Tale Hearts” for consideration: Renata is excited to have the cover of a major magazine before federal agents arrest her husband for securities fraud. After he confesses, she finds out that he has bankrupted them.

This is Julia Garner’s second Emmy nomination. She won this category last year for “Ozark.” She has submitted the episode “In Case of Emergency” for consideration: Ruth denies all knowledge of the killings from the truck fire. Frank Jr. attacks her, putting her in the hospital. She asks Marty to have Frank Jr. killed but is denied.

This is Thandie Newton’s third Emmy nomination. She has now been nominated for all three seasons of “Westworld,” winning this category for Season 2. The actress has submitted the episode “The Winter Line” for consideration: Maeve kills herself after an escape from Nazi guards, returning her to the Operations system. She then tries to lobotomize herself before Lee stops her so she can still try to reunite with her daughter. She discovers that all of her park experiences have been part of a virtual reality simulation.

This is Fiona Shaw’s third Emmy nomination. Last year she received nominations in Drama Supporting Actress for “Killing Eve” and Comedy Guest Actress for “Fleabag.” Shaw has submitted the episode “Management Sucks” for consideration: Carolyn is on bereavement leave and cannot investigate Kenny’s death. She asks for Eve’s assistance, who agrees to help. Konstantin is eavesdropping as they make this arrangement.

This is Sarah Snook’s first Emmy nomination! She has submitted the episode “The Summer Palace” for consideration: Shiv meets with her father and he offers her the role of CEO of their mega-successful media company. She is interested but doesn’t even tell her husband Tom of the offer.

This is Meryl Streep’s fifth Emmy nomination. She was nominated for Mini/Movie Actress for “…First Do No Harm” and won that category for both “Holocaust” and “Angels in America.” She picked up an additional win in Outstanding Narrator for “Five Came Back.” Streep has submitted the episode “I Want to Know” for consideration: Mary Louise is questioned in the courtroom by Celeste, who also accuses her of raising abusive sons. Celeste is awarded custody of her children, causing Mary Louise to leave Monterey Bay.

This is Samira Wiley’s third Emmy nomination, all of which are courtesy of playing Moira on “The Handmaid’s Tale.” She was nominated in Drama Supporting Actress in 2017, before switching to Drama Guest Actress in 2018 and winning that race. Wiley has submitted the episode “Sacrifice” for consideration: Moira, Luke and the baby Nichole visit the Waterford’s prison cell. Moira especially doesn’t want to be there, but gives Serena a piece of her mind about awful past events.