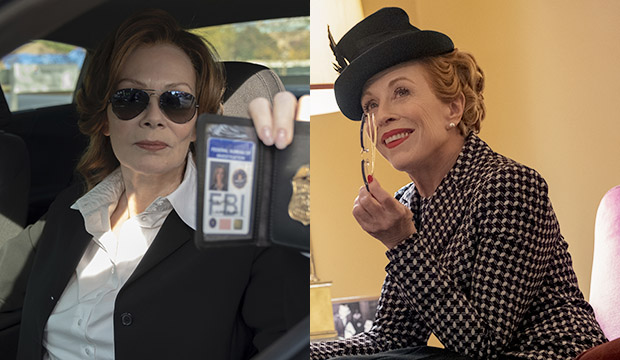 Remember how Hilary Swank beat Annette Bening twice at the Oscars? Well, she’s got nothing on Jean Smart. The “Watchmen” star is the odds-on favorite to take home the Best Limited/TV Movie Supporting Actress Emmy, and if that happens, it would mark the third time she’s defeated Holland Taylor (“Hollywood“) — all in different categories.

Smart and Taylor have nearly identical nomination records — the former has nine bids; the latter, eight. They’ve already faced off twice with Smart coming out on top both times: She won Best Comedy Guest Actress for “Frasier” in 2000 (her first career nomination) over Taylor, who was nominated for the short-lived AMC series “The Lot”; in 2008, Smart snagged the Best Comedy Supporting Actress statuette for “Samantha Who?” as Taylor was on her third of four nominations for “Two and a Half Men.”

Beating the same person multiple times is far from uncommon at the Emmys, but that usually occurs in one category for a regular series (see: “Veep” queen Julia Louis-Dreyfus besting “Parks and Recreation’s” Amy Poehler four years in a row or Brad Garrett getting the better of his own “Everybody Loves Raymond” co-star Peter Boyle three times, including two consecutive years). To potentially do this three times for three shows in three categories over 20 years is a truly wild coincidence and also a testament to both of their career longevities.

SEE Will ‘Watchmen’ be the latest limited series to capture 3 acting Emmys?

This would be Smart’s fourth Emmy — she has another comedy guest actress one for “Frasier” from 2001. Taylor is seeking her second victory, having converted her first bid into a win in 1999 for “The Practice.”

Smart has topped our odds in Phase 2 after “Watchmen” exploded with 26 nominations. In second is Toni Collette, who had led predictions during Phase 1, but “Unbelievable” underperformed with just four nominations and saw both its leading ladies, Merritt Wever and Kaitlyn Dever, snubbed. The three “Mrs. America” contenders — Uzo Aduba, Margo Martindale and Tracey Ullman — are in third, fourth and fifth, respectively. Taylor rounds out the lineup in sixth. All of them have Emmys, so no matter which five lose, they’re still winners. 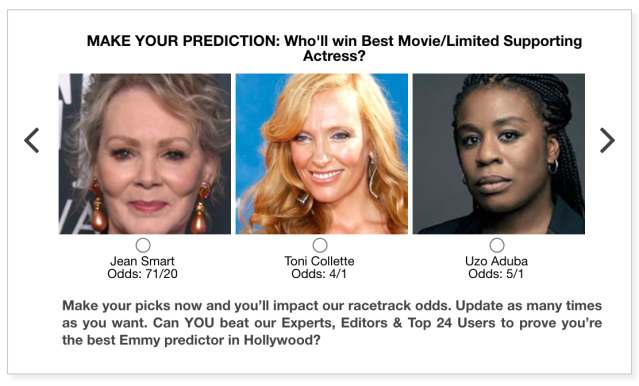