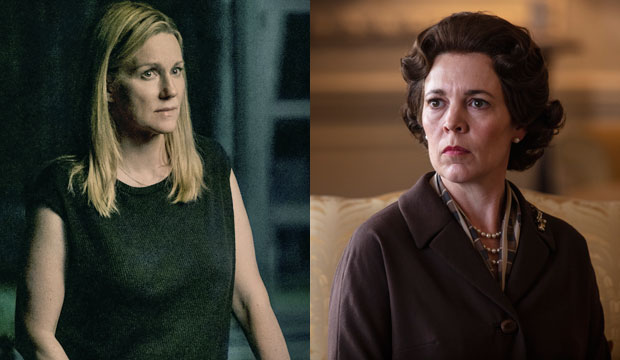 Fresh off her 2019 Best Actress Oscar win for “The Favourite,” Olivia Colman has looked like a strong Emmy contender for Best Drama Actress for taking over the role of Queen Elizabeth II in “The Crown.” But the crime drama “Ozark” has been on the rise ever since it premiered its third season this spring. And now Laura Linney has moved out front in the predictions of our Top 24 Users, who got the highest scores forecasting last year’s Emmys. Are they right?

As of this writing 11 of our Top 24 are betting on Linney to prevail, compared to 10 who are still on Team Colman. If Linney were to win it would extend her remarkable streak. She has won four times in her career thus far, one for every role she has been nominated for. She collected trophies as Iris Bravard in the telefilm “Wild Iris” in 2002, as Charlotte in a guest arc on “Frasier” in 2004, as Abigail Adams in the limited series “John Adams” in 2008, and finally she won one of her two nominations as Cathy Jamison in “The Big C” in 2013.

SEELike Wendy on ‘Ozark,’ Laura Linney is coming for everyone in the Best Drama Actress Emmy race

Linney was nominated  for Best Drama Actress for the first time in 2019 for playing Wendy Byrde, who is complicit in her husband’s criminal enterprises on “Ozark.” But that award went to Jodie Comer for “Killing Eve.” This year Linney had an especially memorable arc as Wendy dealt with the arrival of her bipolar brother Ben (Tom Pelphrey). And our Top 24 Users aren’t the only ones leaning towards her as the likely winner. So are most of the Editors who cover awards year-round for Gold Derby.

But the Expert journalists we’ve surveyed from top media outlets are still betting on Colman by a wide margin with 12 of them predicting Her Majesty to prevail. That’s enough to keep her at the top of our overall odds … for now. Do you agree with our Experts who are predicting Colman, our Editors and Top 24 who are predicting Linney, or are both groups wrong and the winner will be someone else entirely?

MAKE YOUR PREDICTION: Who will win Best Drama Actress?
To save your prediction, you must log in to Gold Derby. Click here to sign in with existing account -- or create a new one.
PREDICTthe 2020 Emmy nominees now; change through July 28