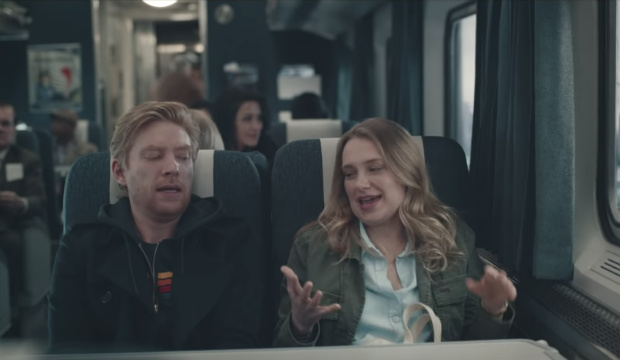 There seems to be an endless glut of new comedy series arriving on your TV screens and mobile devices, which is why the Emmy Awards are so important in today’s climate — they informs viewers which ones are actually worth watching. Last year just one first-season show earned a coveted nomination for Best Comedy Series: “Russian Doll.” In 2018 there were no less than three: “The Marvelous Mrs. Maisel” (which won), “Barry” and “GLOW.” And in 2017, “Atlanta” was the sole freshman program recognized. According to Gold Derby’s Emmy Experts from major media outlets, “Run” has the best shot of earning a 2020 series bid among all of this season’s newbies.

The HBO comedy stars two-time Emmy winner Merritt Wever (“Nurse Jackie,” “Godless”) and Tony nominee Domhnall Gleeson (“The Lieutenant of Inishmore”) as a pair of ex-lovers who drop everything and travel the country together after making a pact years earlier. Executive producer Phoebe Waller-Bridge of “Fleabag” fame is just one of the many eccentric guest stars the couple meets along their high-octane journey.

SEEDon’t send flowers! Instead, sit Mom down in front of the TV and make her watch the best ‘Run’ episode so far

Season 1 of “Run” has a respectable 74 score on Metacritic and an 82% fresh score on Rotten Tomatoes. Of course, HBO has a rich history of claiming the Best Comedy Series prize thanks to “Sex and the City” (2001) and “Veep” (2015-17). The paycaster’s former nominated laffers include “The Larry Sanders Show,” “Curb Your Enthusiasm,” “Entourage,” “Flight of the Conchords,” “Girls,” “Silicon Valley” and “Barry.”

Other new comedies with an outside chance of getting in are “Space Force,” “High Fidelity,” “Little America,” “The Politician,” “Dickinson” and “The Great,” according to our Experts. However, all news shows have an uphill climb in reaching Emmy voters in the era of COVID-19. Because of the outbreak, there are no FYC sessions this awards season, no screenings, no meet-and-greets, etc. The TV academy also outlawed DVDs this year, so the only way networks and studios can sway the masses are by sending out email blasts with links to watch their content in online screening rooms.