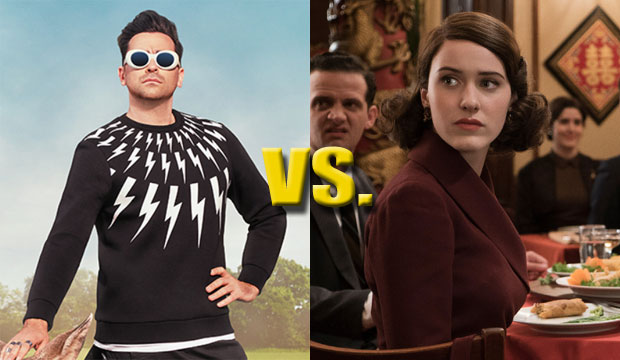 With last year’s Emmy winner for Best Comedy Series, “Fleabag,” out of the way, will voters go back to 2018 champ “The Marvelous Mrs. Maisel” or embrace “Schitt’s Creek” for the first time? According to the Expert journalists we’ve polled from major media outlets, it could go either way. But “Creek” just moved ever so slightly ahead in their forecasts as of this writing.

So who’s right? On one hand, “Maisel’s” sky-high production values already won it eight Emmys for its first season and another eight Emmys for its second season. That’s more than any other comedy series has ever won in a single year, and there’s every reason to believe it will be the nominations leader among comedies this year too with tons of support from a wide variety of television academy branches.

However, “Schitt’s” feels like the hot new thing. Even though it’s competing for its sixth and final season, Emmy voters only just discovered the show last year, and this spring its farewell episodes received tons of media hype and critical huzzahs. That’s a lot like what happened last year when “Fleabag” ambushed the Emmy race.

When you add up the predictions of all of the 2,000+ Gold Derby users who have placed their bets in our predictions center, “Maisel” still has the slight edge, but there’s plenty of time for the race to swing in one direction or the other before voters pick their nominees and winners this summer. Which way do you think it’ll go?

MAKE YOUR PREDICTION: What will win Best Comedy Series?
To save your prediction, you must log in to Gold Derby. Click here to sign in with existing account -- or create a new one.
PREDICTthe 2020 Emmy nominees now; change through July 28