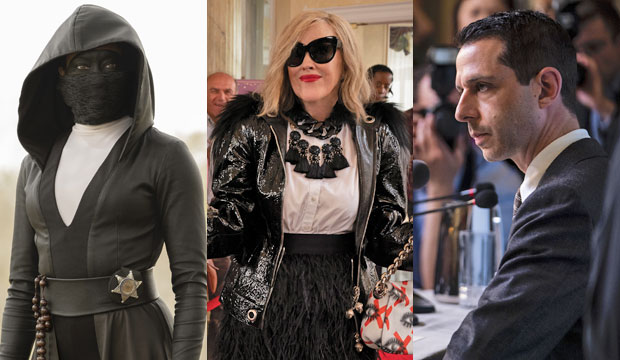 Which Emmy records were set or matched on Sunday and which shows fell short of establishing a new benchmark?

“Schitt’s Creek” came into the primetime ceremony with just two Creative Arts award (casting and costumes). It was defeated by “Insecure” in the editing race and “black-ish” in hairstyling, marking the only occasion this year in which a show that had been snubbed for Best Comedy Series beat a Best Comedy Series nominee head-to-head. “Schitt’s Creek” pulled off an unprecedented sweep of the main comedy categories, going seven for seven. “Angels in America” won the equivalent seven awards in the limited field in 2004. “Hill Street Blues” is the only drama that has come close to a full sweep. Best Drama Supporting Actress was the only major award that it lost in 1981 for its debut season.

With nine wins in total, the final edition of “Schitt’s Creek” ranks as the Emmys’ all-time most-awarded season of a comedy. “The Marvelous Mrs. Maisel” won four this year after leading comedies in nominations, tallying 20 for the second consecutive year. “Schitt’s Creek” received 15 nominations this year, after breaking through with four last year, none of which translated to wins. The first four seasons were snubbed across the board.

SEE all the ways that “Schitt’s Creek” made Emmy history.

“Watchmen” led all programs in wins for the 2020 Emmy Awards. “Watchmen” entered the main telecast with seven Emmys from the Creative Arts ceremonies and picked up four more. Its 11 victories made it the most-awarded program since… last year when “Game of Thrones” won 12. It was however the most-awarded limited series since 2008 when “John Adams” set the record for a program of any kind with its haul of 13. Last year’s Best Limited Series “Chernobyl” is the only other limited series since “John Adams” that hit double digits.

The second season of “Succession” won seven Emmys, including Best Drama Series. That haul, while impressive, is far short of the record 12 Emmys won by each of the last three seasons of “Game of Thrones.” This might surprise the average viewer of the Emmy telecast, as “Succession” won four awards at the main ceremony, whereas “Game of Thrones” received only two awards at the main event in each of the last two years. “Succession” merely co-leads dramas in wins, as “The Mandalorian” won seven Creative Arts awards, only to be shut out on Sunday.

“Succession” was tied with”Ozark” for the most nominations for dramas this year at 18 apiece. The telecast’s penultimate award — a repeat win by supporting actress Julia Garner — saved it from suffering the biggest shutout in Emmy history. That dubious distinction still belongs to the fifth season of “Mad Men,” which went 0-for-17 after its previous four seasons had won a combined 15 Emmys, including a record-tying four Best Drama Series trophies.

The only TV movie that won an Emmy this year was “Bad Education” in the one category that was guaranteed to award one: Best TV Movie. This is the first time that Best TV Movie has been the only Emmy won by a telefilm. “Barbarians at the Gate,” which won in a tie in 1993, is the last Best TV Movie not to win an additional Emmy. As this category was presented at the Creative Arts this year, movies were shut out during the main ceremony for only the second time in Emmy history. It happened in 2015, which was the first of the two other years in which Best TV Movie was cut from the main event. The movie nomination leader this year was “El Camino” with four.

Outside of the narrative-scripted field, “Saturday Night Live” was this year’s nomination leader and it cemented its position as the Emmys’ most-nominated program ever, with 285 total nominations for the series itself now, not including franchise offshoots. The franchise overall has 84 Emmys. Its 15 nominations this year yielded six wins, all of which were at the Creative Arts including Best Variety Sketch Series, which was shuffled off of the main telecast for the first time.

Best Competition Program “RuPaul’s Drag Race” also bagged six this year, including a record-breaking fifth trophy for RuPaul Charles as Best Reality Host, a category that launched in 2008 with the first of four consecutive wins by Jeff Probst for “Survivor.”