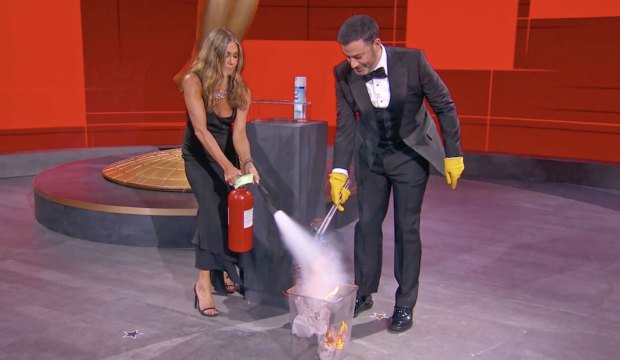 “Why are we having an awards show in the middle of a pandemic?” asked host Jimmy Kimmel at the top of the broadcast of this year’s Emmy Awards. But the answer became abundantly clear throughout the evening as Kimmel presided over a near-perfect Emmy ceremony, one that met the challenge of the moment without sacrificing humor and entertainment.

It’s fair to ponder whether the success of the evening should be qualified in light of the current social and political climate. Would this ceremony have worked as well if we weren’t in a pandemic, or if it hadn’t been the first of its kind? It’s hard to say. But because the show was so unprecedented, there were any number of opportunities for it to go down in flames. Thankfully, everything went off without a hitch.

Kimmel has proven himself a reliably strong host in previous ceremonies, but his ability to balance the seriousness of the moment with true comic highlights made him the ideal host for this particular event.

The opening was perfect both as a piece of comedy and a comment on the moment. Kimmel’s delightfully old-fashioned monologue would have probably been a hit in front of a live audience, but instead, there were cuts to audience reactions from previous ceremonies, including a crowd reaction from Kimmel himself, after which the lights went up on an empty arena filled with cardboard cutouts — and a non-cardboard Jason Bateman, who was apparently filling in for Matt Damon as Kimmel’s arch nemesis for the evening. Kimmel then revealed an array of screens reminiscent of a TV wall at Best Buy. So as the Emmys were handed out to some of the winners by interns in hazmat suits, the pandemic was front and center.

However, it was not a depressing ceremony by any means. It seemed like the inability to attend the Emmys in-person created a strange sense of camaraderie among the nominees. Ironically, the losing contenders had more of a presence than usual as their webcams stayed on while they reacted to the winners’ speeches. For instance, even though she lost her category, previous winner Alex Borstein (“The Marvelous Mrs. Maisel”) almost stole the Comedy Supporting Actress moment with her balcony-set boudoir pose.

Throughout, Kimmel kept the comedy front and center without minimizing the seriousness of the moment. An early bit with Jennifer Aniston and a stubborn trash can fire was hysterical. There were moments of solemnity as well. Kimmel’s simple yet powerful tribute to late Supreme Court justice Ruth Bader Ginsburg led into a stunning In Memoriam segment featuring H.E.R. singing a powerful rendition of “Nothing Compares 2 U.”

SEEEmmys 2020 winners: Best prediction scores by our Editors and Users

Meanwhile, Governors Award recipient Tyler Perry gave one of the most powerful speeches of the evening as he considered his career in the context of generations of Black struggle. There were also stirring political moments from Best Movie/Limited Actor winner Mark Ruffalo (“I Know This Much is True”) and a list of “un-thank yous” from Best Drama Series winner Jesse Armstrong (“Succession“) directed at the likes of US President Donald Trump and British Prime Minister Boris Johnson.

A further testament to the success of the ceremony was that the absence of many true surprises did not detract from the show’s pace or the audience’s enjoyment. The early and historic domination of “Schitt’s Creek” in the comedy categories established one thing: Even Daniel Levy’s reactions are Emmy-worthy. The once-small Canadian comedy — whose title needed a chyron every time its name was said out loud so that ABC could show that it wasn’t really a curse word — owned the first hour of the evening. But it was Levy’s joyous reactions to wins by Catherine O’Hara, Eugene Levy and Annie Murphy that stole the show.

SEETop 5 most shocking moments at the Emmys: Those upsets by Zendaya and Uzo Aduba …

No ceremony is perfect, though. Presenter Randall Park proved that alpacas, while adorable, are not optimal comedic partners. Bits featuring Anthony Anderson and Jason Sudeikis went on far too long. And did we really need house DJ D-Nice to have that much of a presence in the ceremony?

But in one of the most beautiful decisions of the ceremony, real-life heroes were given the spotlight. Teachers, ranchers, truck drivers, first-responders and COVID survivors were given moments to shine and present awards. It was a shame that the producers didn’t carry that through the whole ceremony. If anything, the show might have had an even greater impact if everyday folks were the only ones giving out the awards. After all, aren’t they the ones that deserve it?