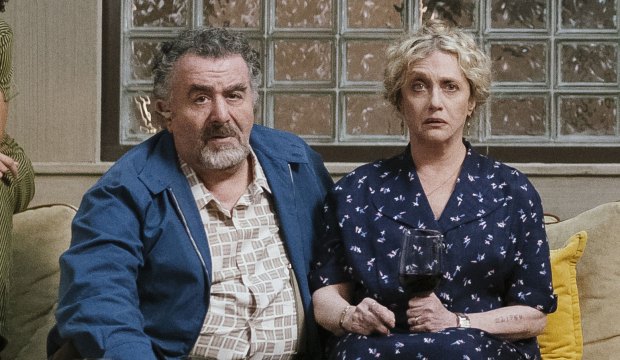 Much of the attention for Amazon‘s “Hunters” has gone to Al Pacino since it’s the first regular TV series role for the Oscar winner. But the effect of the show, about a rag-tag group that seeks out and executes undercover Nazis, hinges on two other performances that are worthy of awards consideration: Saul Rubinek and Carol Kane as Murray and Mindy Markowitz.

At first Murray and Mindy’s presence on the team seems like a gag — isn’t it funny to see this sweet old Jewish couple going all “Inglourious Basterds” on Nazi scum? But as the season develops they become the characters who best connect the audience to the story’s high emotional stakes. Murray and Mindy are both Holocaust survivors, and one of their young children was murdered. They harbor rage against the Nazi officer responsible, but also guilt for failing to protect their boy. Spoilers for season one follow from here on to best explain why their story arc and performances are the heart of the show.

Murray and Mindy eventually have their son’s killer at their mercy and struggle to decide whether torturing him would truly avenge their son or betray his memory. In these scenes both actors embody the internal struggle that defines the show. Is revenge the same as justice? Is righteous violence any better than the violence committed against them and their family? Is it worth sacrificing your soul to protect the next generation from fascism?

As they wrestle with that decision, a mission goes awry and Murray dies in an explosion. In the following episode, “The Jewish Question,” Mindy buries her husband, and in what may be the most powerful scene of the entire season she has a vision of him and their son in the afterlife. After this experience she kills the captive Nazi immediately, but does not torture him, having decided it was the best way to honor their son without succumbing to her deepest, darkest hatred.

All of the show’s themes play out in Murray and Mindy’s storyline and in Rubinek and Kane’s performances: what path do the Jewish people take after suffering one of the most profound atrocities in human history? Should they try to live in peace or harden themselves to defend what remains? Is it possible to do both? The fact that the show takes place in the 1970s makes this point even more powerful: by then the Holocaust was long enough ago that it’s a distant memory for some, but its traumas are still fresh for its victims.

Kane is already a two-time Emmy winner for her role as Simka Dahblitz on the sitcom “Taxi,” and her dramatic turn here shows her range and depth — for a further study in contrasts, compare this to her wacky performance in the “Unbreakable Kimmy Schmidt” interactive special, which premiered on May 12.

Meanwhile, veteran character actor Rubinek has yet to be nominated for an Emmy despite decades of credits including supporting, guest and recurring roles in “Hill Street Blues,” “Star Trek: The Next Generation,” “And the Band Played On,” “L.A. Law,” “The Practice,” “Frasier,” “The Good Wife” and many more. He finally deserves his due for showing the conflict of a man who loves his family while still being angry with God.

They are what “Hunters” is all about: finding the line where love and justice end and hate and cruelty begin.

MAKE YOUR PREDICTION: Who will win Best Drama Supporting Actor?
To save your prediction, you must log in to Gold Derby. Click here to sign in with existing account -- or create a new one.
PREDICTthe 2020 Emmy nominees now; change through July 28