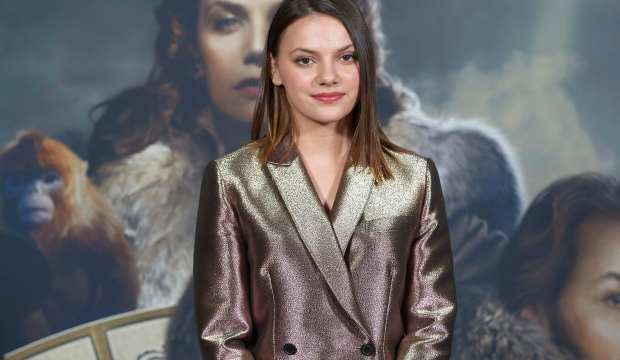 After coming on the scene starring as Laura/X-23 opposite Hugh Jackman in the 2017 Oscar nominated blockbuster film, “Logan,” Dafne Keen is now starring in the BBC/HBO television series adaptation of Philip Pullman’s fantasy novels, “His Dark Materials.” She may only be 15 years old, but she deserves Emmy recognition for her performance. (SPOILERS FOLLOW FOR SEASON ONE)

Keen plays Lyra Belacqua, an orphan girl who was raised at Jordan College in an alternate world where all humans have animal companions called daemons, which are manifestations of the human soul. Over the course of the first season, Lyra discovers a dangerous secret that involves Lord Asriel Belacqua (James McAvoy) and Marisa Coulter (Ruth Wilson). In her search for a missing friend named Roger Parslow (Lewin Lloyd), Lyra also uncovers a series of kidnappings and its link to a mysterious substance called Dust, which leads her on a journey of epic proportions and will lead to her crossing paths with a boy named Will Parry (Amir Wilson).

On her journey, Lyra meets Texan aeronaut Lee Scoresby (Lin-Manuel Miranda), who is searching for a disgraced armoured bear named Iorek Byrnison (Joe Tandberg). When Lyra finds Iorek, she helps him reclaim his honor, skillfully manipulates him, and gets him his rightful seat on the throne in Svalbard. Iorek renamed her “Lyra Silvertongue” and raced to help her save Roger from Asriel.

The Magisterium’s General Oblation Board thought no one would notice if a bunch of Gyptian children and orphans were taken. However, Lyra and the Gyptians never stopped looking for them. Under the Magisterium, Mrs. Coulter’s main purpose was to experiment with ways to safely separate humans from their daemons. They believed that doing so would save humanity from Original Sin, but the process left the children as hollow shells of their former selves, or dead.

The alethiometer led Lyra to Billy Costa (Tyler Howitt), but she was too late. She brought him back to the Gyptians long enough for them to say goodbye before he passed. After storming Bolvangar and freeing the children, everyone thought Roger was safe. Unfortunately, Asriel intercised Roger to use the resulting energy to open a portal to another world. The process left Roger dead in Lyra’s arms.

Asriel introduced the other worlds early, but when Boreal stepped through the tear into a world without daemons, we saw the two worlds mix for the first time. He searched for Col. John Parry (Andrew Scott) and found the wife (Nina Sosanya) and son he left behind. As Lyra walked through the portal that Asriel opened, Will walked through the tear. It is over the course of her journey that Keen gets multiple opportunities to show such a wide range of emotions, proving that at such a young age, she can carry a multi-million dollar series on the weight of her shoulders very well.

This year’s Emmy race for Best Drama Actress is challenging given the number of older veteran actresses in contention. Among them are Jennifer Aniston (“The Morning Show”), Olivia Colman (“The Crown”), Jodie Comer (“Killing Eve”), Viola Davis (“How to Get Away with Murder”), Nicole Kidman (“Big Little Lies”), Laura Linney (“Ozark”), Elisabeth Moss (“The Handmaid’s Tale”), Sandra Oh (“Killing Eve”), and Evan Rachel Wood (“Westworld”). But with that being said, 15-year-old Keen is very worthy of consideration alongside them.