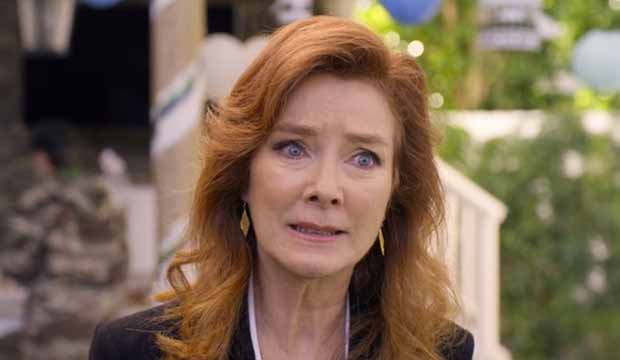 Valerie Mahaffey is one of those wonderful character actresses who, when she pops up on your TV screen, your instinct is to think “Haven’t I seen her somewhere before?” Well, if you’ve watched much television anytime over the past four decades, you certainly have come across Mahaffey, as she has appeared in more than 80 films and television series, with regular or recurring roles on such acclaimed series as “Glee,” “Wings,” “The Powers That Be” and “Desperate Housewives.” Indeed, shey shows no signs of slowing down, as she currently appears in recurring roles in two separate series this season. On “Young Sheldon,” for example, she appears as Ms. MacElroy, Sheldon’s homeroom and English teacher.

But the role that is bringing Emmy heat to Mahaffey in the Best Comedy Guest Actress category this year is that of real estate whiz Lorna Harding in the Netflix comedy “Dead to Me.” Lorna, who is the mother-in-law of Jen Harding (Christina Applegate) and mother of Jen’s husband Ted, who was killed by a hit-and-run driver, is quite a piece of work. Ted’s death leaves Jen with financial problems, so Jen, who once left her job at Lorna’s real estate agency, begs her for her old position back. Lorna, who really has little use for Jen, agrees, but Mahaffey’s dry-as-toast, passive-aggressive comments about Jen as they work together are just hilarious and have become one of the highlights of this hot comedy.

If she may seem like a bit of a long shot, it should be noted, though, that Mahaffey is no stranger to Emmy. In 1992, she won as Best Drama Supporting Actress for “Northern Exposure,” becoming the only actor from that beloved series ever to win an Emmy for the show. It was even more shocking since she was more of a guest star on the show than a member of the cast. And in 1980, in only Mahaffey’s second professional credit, she earned a Daytime Emmy nomination for her dramatic performance in the NBC soap “The Doctors.”

SEE‘Dead to Me’ Season 2 will resurrect comedy category at Emmys, predict these savvy Experts

Can history repeat itself? This may be a challenge even for a pro like Mahaffey, as her Gold Derby odds are currently at 100/1. But, as it has been often said on these boards, last year’s Best Comedy Actress Comedy champ, Phoebe Waller-Bridge, faced similar odds in the early summer for “Fleabag” and took home the trophy. Another advantage that Mahaffey holds is that “Dead to Me” is on Netflix, which means her performance is able to be viewed all day, every day by voters. Having been in the business for over 40 years, she has worked with a lot of TV folks, many of whom are likely academy members. So despite her current odds, don’t count Mahaffey out. This former champ is more than capable of a surprise on Emmy nomination morning.