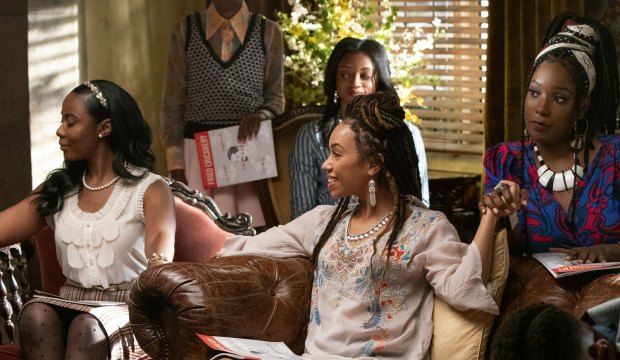 America has been on a wild ride since Justin Simien‘s film “Dear White People” opened in 2014 and then premiered as a Netflix series in 2017 about Black students at a predominantly white Ivy League college. Donald Trump was elected president, white supremacists were dubbed “fine people,” and a pandemic that disproportionately kills Black people combined with police murders of unarmed Black people led to renewed calls to recognize that Black lives matter. So Emmy voters, now’s a good time to get caught up with the show if you haven’t already.

You know, it would be nice if “Dear White People” looked like a quaint artifact rather than an ever more vivid reflection of the world we live in, but I don’t think the show is worth watching as an education on Black activism, per se — though it’s certainly mad as hell, especially through its outspoken central character, Sam White (Logan Browning). I think it’s especially meaningful right as a celebration of Black community.

And not “The Black Community” as a monolith, but as a wide spectrum of identities and viewpoints: male, female, gay, straight, journalist, social climber, student politician, filmmaker. The characters have many common goals, vibrant arguments and contentious clashes. And season three of the show, which premiered in August 2019, cast its net even wider. Previous seasons centered each episode on a single character’s point of view, but the format loosened up in year three to interweave stories, introduce new characters and expand on established ones.

The core characters, meanwhile, were trying to find themselves beyond the roles they’ve established for themselves because no one enters college fully formed, even when you’re as committed to social justice as Sam and her classmates. Raging against the machine takes a toll, and Black life should be about Black joy too. Perhaps that’s what makes “Dear White People” so comforting right now: it’s about striving to be happy in a world that’s often inhospitable to you. And that’s no less radical.