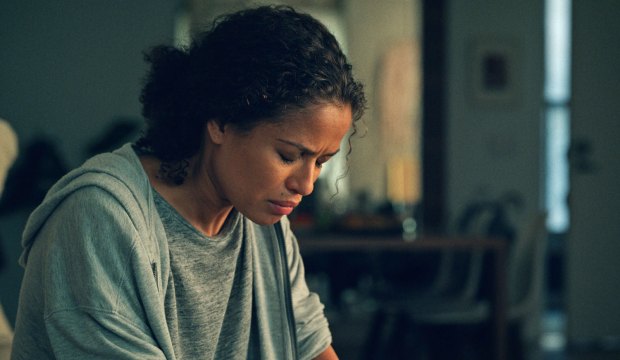 Much of the awards attention for “The Morning Show” has gone to Jennifer Aniston, who won a Screen Actors Guild Award and was nominated for a Golden Globe for playing embattled TV anchor Alex Levy. Now she’s one of the front-runners for Best Drama Actress at the Emmys, according to the combined predictions of our users. But we shouldn’t write off her co-star Gugu Mbatha-Raw, whose performance is the linchpin of the first season. Spoilers follow, since her character arc is crucial to the effect of the whole series.

Mbatha-Raw plays Hannah Shoenfeld, the head talent booker for the title news program. Early in the season she tries to convince a victim of sexual harassment to tell her story on the very show where she experienced that harassment, but in later episodes we discover that Hannah was herself a victim of misconduct and was promoted to her current position to shut her up. When this comes to light, the shame and trauma she worked so hard to bury rise back to the surface, and in the season finale she dies by suicide from a drug overdose.

The entire season turns on her character’s revelations, which show how her harasser Mitch Kessler (played by Steve Carell) could have an entirely different understanding of their encounter and inspire Aniston’s character Alex to finally take a public stand against the abusers at her own network. Hannah is arguably the most important character of the season from a storytelling perspective, and Mbatha-Raw’s performance gives the story its emotional impact.

There are two scenes in particular where Mbatha-Raw carries the whole show’s themes on her shoulders, making the insidiousness of sexual harassment specific and personal. In episode eight, “Lonely at the Top,” flashbacks show Hannah — then a junior booker for the show — taken under Mitch’s wing until he comes onto her. The actress communicates the storm of emotions on her face: the surprise, the desire to get away, the fear of what might happen if she rejects him, and finally her grim resignation to what is happening. We can see why the thoughtless and uncaring Mitch mistakes this encounter as consensual, but Mbatha-Raw shows how clearly it isn’t if only he were paying attention.

Then in the finale episode, “The Interview,” when Hannah’s experiences are revealed, “Morning Show” co-anchor Bradley Jackson (Reese Witherspoon) speaks to her in preparation for grilling Mitch live on the air. But all the emotions Hannah had been trying to suppress come flooding to the surface as she loses control of her own story. This is a reversal of the scene from earlier in the season when Hannah tries to coax another victim of Mitch to tell her story, and it puts all her past scenes in heartbreaking context.

Hannah is reminiscent of the composite character played by Margot Robbie in the fact-based film “Bombshell” about the rampant sexual harassment committed by Fox News chairman and CEO Roger Ailes. Robbie earned an Oscar nomination for showing the toll of being taken advantage of by a man in a position of power. But Mbatha-Raw gets to dig even deeper because she has 10 hours to do it instead of just 100 minutes.

Mbatha-Raw has been on the cusp of a major awards breakthrough for years, winning a British Independent Film Award for her performance in “Belle” (2013), earning a Gotham Award nomination for “Beyond the Lights” (2014) and starring in the “Black Mirror” episode “San Junipero,” which won the 2017 Emmy for Best TV Movie. If Emmy voters this year watch the whole season of “The Morning Show” — and since the coronavirus pandemic has suspended TV production all across the industry, they have the time — and they’re planning to vote for Aniston and perhaps also Witherspoon, Carell and Billy Crudup as a Machiavellian network exec, there’s no reason to believe they won’t check Mbatha-Raw’s name too.

SEEWill Jennifer Aniston (‘The Morning Show’) pull off this Emmy feat? Only Edie Falco has ever done it before

And there’s further precedent. Actors including Drea de Matteo (“The Sopranos”), Zeljko Ivanek (“Damages”) and Margo Martindale (“Justified”) have won for playing tragic characters who died during the seasons they won for. And heck, Ben Mendelsohn won his Emmy the year after he was killed off on “Bloodline.” Will Mbatha-Raw get her due with the other “Morning Show” actors we’re currently predicting?