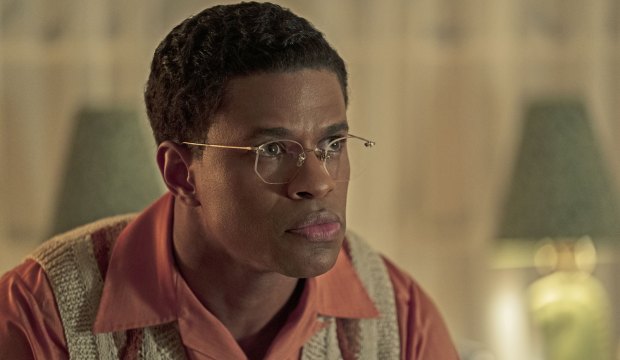 Every year since 2010, Ryan Murphy has had at least one of his productions competing in the Emmy race. He’s looking to continue that trend this year with his latest miniseries, “Hollywood.” While the show does feature a large ensemble of well-established actors such as Darren Criss, Patti LuPone, Dylan McDermott, Jim Parsons and Holland Taylor, there’s one performance in particular that deserves Emmy attention, and that would be newcomer Jeremy Pope.

Pope plays Archie Coleman, an aspiring gay black screenwriter who’s facing prejudice during the golden age of Hollywood in the post-World War II era. In the very first episode, he sells a screenplay he wrote about British actress Peg Entwistle for $100, but since he’s black, he won’t be put under contract and needs the money. When aspiring actor Jack Castello (David Corenswet) offers him a job hustling at a gas station run by Ernie West (McDermott), Archie takes him up on the offer.

Archie’s first customer is a square-jawed, corn-fed guy named Roy Fitzgerald (Jake Picking), a nervous 20-something from Illinois who came out to L.A. to connect with his father and become an actor. As the two of them end up developing a romantic relationship, Archie understands Roy’s struggle to stay in the closet in order to find work.

In the second episode, Archie’s script gets picked up by aspiring filmmaker Raymond Ainsley (Criss) to direct for Ace Studios. When Raymond asks Archie why he decided to write about a white woman, he makes his own idealistic speech about the effects of the industry on the people trying to make it — one of multiple stirring speeches he gets to deliver while fighting for the most basic recognition for his work. When executive Dick Samuels (Joe Mantello) gives “Peg” the green light, he isn’t even aware that Archie is a black writer. At first the studio head (Rob Reiner) tries to take his name off of it, and Pope expresses the internal conflict between Archie’s indignation and the pressure to hold his tongue in a system where he holds so little power.

His relationship with Roy (now using the stage name he’s better known by, Rock Hudson) develops even further throughout the making of the film, whose title changes to “Meg” and is cast with a black actress (Laura Harrier) in the title role. And even as he makes historic progress, Archie continues to push boundaries not just as a black man but as a gay man in a world that is actively hostile to who he is. Through the lens of 2020, it’s interesting to watch how far we’ve come in show business in terms of respect for LGBT people and people of color both in front of and behind the camera.

Last year Pope made his Broadway debut starring in Tarrell Alvin McCraney’s play “Choir Boy” before going on to appear as Eddie Kendricks, an original member of The Temptations, in the jukebox/biographical musical “Ain’t Too Proud.” He ended up receiving Tony Award nominations for both performances, which made him only the sixth person ever to earn Tony nominations for two different productions in the same year.

It would also be quite a remarkable achievement if Pope now ends up receiving an Emmy nomination for his television acting debut in a field that could also include Oscar winners Russell Crowe (“The Loudest Voice”) and Jeremy Irons (“Watchmen”), Oscar nominees Hugh Jackman (“Bad Education”) and Mark Ruffalo (“I Know This Much is True”), and Emmy winner Aaron Paul (“El Camino”).