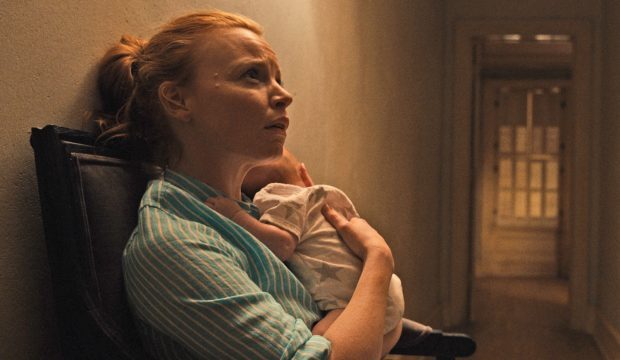 Ever since the Apple TV+ streaming platform officially launched in the fall of 2019, it has debuted several new scripted shows. Among them is “Servant,” created by BAFTA nominee Tony Basgallop (“To the Ends of the Earth,” 2006) and executive produced by Oscar nominee M. Night Shyamalan (“The Sixth Sense,” 1999). Among the show’s four principal actors, there is one performer in particular who deserves Emmy recognition, and that would be Lauren Ambrose. (SPOILERS FOLLOW FOR SEASON ONE)

SEEWill Jennifer Aniston (‘The Morning Show’) pull off this Emmy feat? Only Edie Falco has ever done it before

Ambrose plays Dorothy Turner, a local television news reporter, recently bereaved mother, and wife to Sean (Toby Kebbell). They’ve hired Leanne (Nell Tiger Free) to be the nanny for their baby son, Jericho, who is actually a doll intended to transition the couple through their grief following the death of their real infant son. But Leanne’s arrival brings about strange and frightening occurrences.

The ninth episode, “Jericho,” which was directed by Shyamalan, provides an especially great showcase for Ambrose. It’s a flashback episode where we learn more about what happened to their baby. “Jericho” begins with Dorothy giving birth to her son at home in a tub. She’s instantly in love. Her news colleagues congratulate Dorothy on the birth of her son on the air, and they seem to be getting on with family life. But everything changes when Sean gets offered his own TV opportunity that he can’t refuse: a reality cooking competition.

“Jericho” highlights the struggle parents have in a world where support is lacking often unequal between the father and the mother. Sean leaves for his new job while Dorothy looks after the baby. When they later connect via video call, they nag at each other like any couple might with a newborn, but it’s clear that Dorothy is struggling. She tells Sean he looks exhausted on TV, but it’s evident that her mental wellbeing is of major concern. One day Dorothy goes shopping with Jericho during a heatwave. She returns home, takes the groceries into the house, goes to the bathroom, and then goes to sleep. But Dorothy later wakes up, realizing that she’s left Jericho in the car. She rushes to the vehicle to find the baby dead.

It is during those flashbacks that we experience the depth of Dorothy’s struggle and pain through Ambrose’s performance. By the end of the first season we also understand why Dorothy had to adopt a brand new personality after such a horrific event, and why she felt so lost in it.

Ambrose previously received two consecutive Emmy nominations for Best Drama Supporting Actress in 2002 and 2003 for her role as Claire Fisher on HBO’s “Six Feet Under.” Most recently — and showing further range as an actress — she received Tony and Grammy nominations for her performance as Eliza Doolittle in the 2018 Broadway revival of the classic 1956 musical “My Fair Lady.”

This year’s Emmy race for Best Drama Actress is challenging given the number of returning nominees/winners eligible to return this year. Among them are Jodie Comer (“Killing Eve”), Viola Davis (“How to Get Away with Murder”), Nicole Kidman (“Big Little Lies”), Laura Linney (“Ozark”), Elisabeth Moss (“The Handmaid’s Tale”), Sandra Oh (“Killing Eve”), and Evan Rachel Wood (“Westworld”). That’s not even including other first-time candidates such as Jennifer Aniston (“The Morning Show”) and Olivia Colman (“The Crown”). But Ambrose is worthy of consideration alongside them.