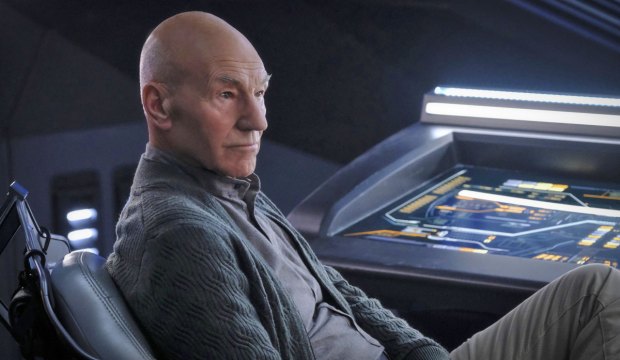 We opened our official Emmy predictions center on February 26, and one of the first things that came to my mind was how much I hope Patrick Stewart earns a Best Drama Actor nomination for “Star Trek: Picard.” It would be the first recognition for the CBS All Access streaming service in a primetime telecast category (“The Good Fight” and “The Twilight Zone” have been nominated in Creative Arts races), but more importantly it would be the first Emmy recognition for Stewart for the most iconic role of his career: Jean-Luc Picard.

SEEGuinan back on ‘Star Trek: Picard’? Patrick Stewart asks Whoopi Goldberg to make it so [WATCH]

Stewart played the Starfleet captain in “Star Trek: The Next Generation” from 1987 to 1994 and then in four feature films from 1994 to 2002. Picard was last seen in the 2002 film, “Star Trek: Nemesis,” so the new series marks his return to the franchise after 18 years away. It’s fitting then that the actor is playing Picard returning to the stars after walking away from Starfleet. His new mission has him assembling a ragtag new crew to rescue an android whose life is in danger.

In the post-“Sopranos” era of TV antiheroes, Stewart’s Picard stands out for his downright decency. He’s driven by moral conviction, but he has never been just a one-dimensional do-gooder. He retains his wily sense of humor and shades of obligation, regret and anger. This portrayal carries greater weight when considered in the context of his 33 years in the role, but I think his performance in the new series resonates even if you haven’t been a Trekker all that time. It holds up on its own terms as the story of a man trying to honor a departed friend and make amends for his own mistakes in this process.

Stewart was nominated for a Screen Actors Guild Award in 1995 for the final season of “The Next Generation,” but that was the only major industry recognition he received for his performance. He did receive four Emmy noms for later projects, but he didn’t win any of them: Best Movie/Mini Actor for “Moby Dick” in 1998, Best TV Movie as a producer of “The Lion in Winter” in 2004, Best Comedy Guest Actor for “Extras” in 2006 and most recently best Movie/Mini Supporting Actor for “Hamlet” in 2010.

“The Next Generation” won 18 Emmys over the course of its run, but all in Creative Arts categories. That was before Emmy voters started taking sci-fi and fantasy shows seriously. Recent years have seen Best Drama Series winners like “Lost” and “Game of Thrones” and nominees like “True Blood,” “Westworld” and “Stranger Things.” So I hope that means the television academy will now be able to appreciate what “Trek” fans have known for decades, that Patrick Stewart is one of the best actors on TV.