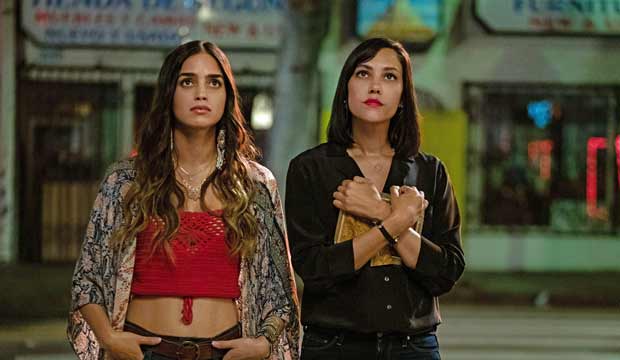 I didn’t want to have to say goodbye to “Vida.” The Starz series aired its third and final season over the spring, and it was, from the outset, a one-of-a-kind show. Sexy and smart. Uplifting and uncomfortable. Intoxicating and infuriating. “Vida” was all of these and more and deserves a farewell hug from the Emmys.

Created by Tanya Saracho, “Vida” is the story of Lyn (Melissa Barrera) and Emma (Mishel Prada), estranged sisters who return to their home in Boyle Heights, a predominantly Mexican-American neighborhood in Los Angeles, following the death of their mother. Their frosty reunion is complicated by the revelation that their mother was married to a woman when she died and has left the bar to them. This forces them to work with their mother’s widow Eddy (Ser Anzoategui) as they try to save the bar from financial ruin, outside buyers and the protests of those in their own community.

So “Vida” is both a family drama and a workplace comedy, but also more. The show highlights gentrification, social activism, gender inequality, queer relationships and yes, even queer sex. All of these issues are so deeply woven into the fabric of the storylines that you never feel like you’re being lectured or patronized. We see every facet of these communities and share in their triumphs and their heartaches.

One of the show’s greatest strengths is its writing, particularly Saracho’s willingness to trust her audience. Characters switch from English to Spanish and back again without the show providing subtitles or explanation. It’s like being at an intimate party and eavesdropping on the guests’ most personal conversations. Many shows would drown you in exposition; “Vida” never makes that mistake.

The series is anchored by three performances that are so effective in part because they defy simple categorization. Mishel Prada‘s Emma is a hardened woman whose cold exterior hides a lifetime of pain. Emma’s own sexuality was a source of conflict in her relationship with her mother, and now she’s desperate to maintain control. That desperation manifests in moments of stone-faced rage and sometimes even cruelty.

Prada’s gift is that she makes Emma often unlikable but never unsympathetic. There’s always a sense of deep pain in Emma’s eyes, the pain of a lifetime of self-protection, often at the expense of forming real human connections. That’s why one of the most refreshing characters to join the series was Nico, played brilliantly by Roberta Colindrez. As Emma’s relationship with Nico blossoms, the vulnerability that Emma has tried to hide slowly begins to come through.

Barrera’s work as just as good as the free-spirited Lyn. When we meet Lyn in season one, she is a young woman without limits who seemingly makes one bad decision after another, whether it’s reckless spending or reckless sex. But thanks to Barrera’s carefully calibrated work, Lyn never comes across as a stereotypical 20-something unable to see beyond herself. Lyn is as damaged as her sister, but expresses that pain in a different way.

Acting as an anchor to these two troubled sisters is Anzoategui’s Eddy, who emerged as the heart and soul of the series. Eddy never asked for any of her late wife’s drama. But she keeps her head up, facing her own grief while attempting to form relationships with these sisters whose drama quickly envelops Eddy’s life. Anzoategui deserves to be the first non-binary actor to earn an Emmy nomination for their quiet and beautiful work throughout the series. And we deserve an Eddy spinoff.

The word “brave” may be overused when it comes to ethnic and sexual representation on television, but the adjective applies in both cases. “Vida” was explicit without being voyeuristic. It was politically daring without being preachy. Its laughs and tears were earned. And at the center of it were three Emmy-worthy performances guided by Emmy-worthy scripts. “Vida” was messy, sexy, real and honest, and now that it’s over, I’ll miss it.