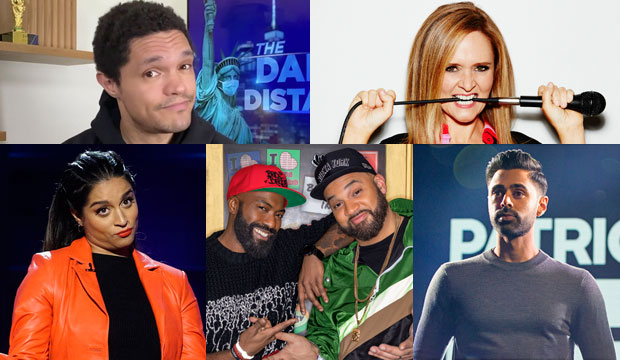 It wasn’t too long ago that it was easier to name late night talk show hosts named Jimmy than it was to name any who were women or people of color. But as television has expanded to more networks and streaming platforms and talk shows have seen a political boom influenced by Jon Stewart‘s celebrated tenure on “The Daily Show,” we might see more non-white-guy nominees for Best Variety Talk Series than ever before.

The tip of the spear might actually be the host who took over for Stewart on “The Daily Show.” South African comedian Trevor Noah took the reins in 2015, but his version of the program wasn’t nominated for Best Variety Talk Series until 2018. It was nominated again in 2019, and this year our odds say it could even be a threat to win, especially after it transformed itself during the coronavirus pandemic; it was one of the first shows to return to the airwaves with its at-home edition, helping to set the standard for socially distanced shows.

We currently rank it second with 39/10 odds based on the combined predictions of our users. The four-time reigning champ “Last Week Tonight” is still the front-runner, and for good reason: when the academy finds a talk show they like they tend to stick with its for years. But COVID-19 may have shaken up the industry enough to dislodge the perennial winner, and indeed six of the Expert journalists we’ve polled currently think Noah will win: Jen Chaney (Vulture), Eric Deggans (NPR), Shawn Edwards (WDAF-TV Fox), Nikki Novak (Fandango), Tom O’Neil (Gold Derby) and Susan Wloszczyna (Gold Derby). If those Experts are right, Noah would be he first Black talk show host ever to win.

Late night also used to be a boys’ club, and still mostly is, but “Full Frontal with Samantha Bee” has been nominated every year since 2017. The TBS series won a writing award for its “Not the White House Correspondents’ Dinner” special in 2017, but it hasn’t won top honors yet, and it currently ranks fourth with 13/2 odds.

Outside our top five predicted nominees in the category are other potentially groundbreaking contenders. The Peabody Award-winning “Patriot Act with Hasan Minhaj” is on the bubble with 35/1 odds, and talk shows have lacked diversity for so long it almost goes without saying that Hasan Minhaj would be the first talk show host of Indian descent to earn a nomination. It’s definitely on the academy’s radar: its graphics department won Best Motion Design at last year’s Emmys.

Beyond that are other shows looking for a breakthrough, including Showtime’s “Desus and Mero,” which is hosted by Jamaican-American Desus Nice and Dominican-American The Kid Mero. Iranian-American Reza Aslan is eligible for hosting “Rough Draft” on the Topic streaming service. And NBC’s “A Little Late with Lilly Singh” already made history as the first late night talk show on a broadcast network hosted by an openly bisexual person of Indian and South Asian heritage — whew, that’s a lot of firsts in just one person. And it could be a lot of firsts in one category.