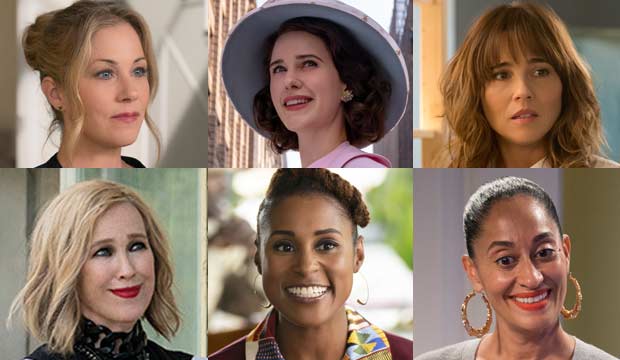 Apparently one of the most telling precursors for winning Best Comedy Series at the Emmys is having a strong female lead. Indeed, the past five Best Comedy Actress champions have gone matchy-matchy with their series in the winner’s circle: Phoebe Waller-Bridge and “Fleabag” (2019), Rachel Brosnahan and “The Marvelous Mrs. Maisel” (2018) and Julia Louis-Dreyfus and “Veep” (2017-15). Who might this wild trend benefit at the 2020 Emmys?

Catherine O’Hara and “Schitt’s Creek” are currently leading their respective categories, according to Gold Derby’s combined predictions. But also watch out for repeat wins by Brosnahan and “Mrs. Maisel,” first-time victories for Issa Rae and “Insecure,” and both of those “Dead to Me” scene-stealers, Christina Applegate and Linda Cardellini. The sixth actress nominee, Tracee Ellis Ross (“Black-ish”), doesn’t have a corresponding series bid this year.

Odds front-runner O’Hara plays over-the-top ex-soap star Moira Rose on the Canadian laffer about a rich family who loses everything and moves to a tiny blue-collar town. This would be O’Hara’s first Emmy for acting, though she previously won a trophy for writing “SCTV Network 90” (1982). Even though Pop’s “Schitt’s Creek” was snubbed its first several seasons on the air, Emmy voters have discovered it thanks to Netflix reruns and are predicted to reward it with several trophies for the buzzed-about final season.

But back to that recent Emmy trend. Prior to the JLD & “Veep” sweep, “Modern Family” won five in a row for Best Comedy Series. The pattern of actress matching series couldn’t happen those years as all of the cast members campaigned in supporting in a show of solidarity. It’s arguable that Julie Bowen was actually “Modern Family’s” female lead — she claimed two trophies in supporting (2011-12) — but we’ll leave her off the list due to this technicality.

Looking back through Emmy history, there are a whole host examples of Best Comedy Actress going hand-in-hand with Best Comedy Series: