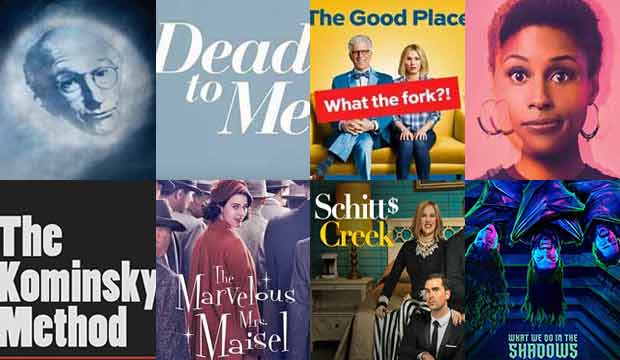 Our passionate Gold Derby forum posters, many of whom are industry insiders hiding behind cyber handles, are busy weighing in on the 72nd Primetime Emmy Awards. They don’t not mince words when it comes to their thoughts on one of Hollywood’s biggest nights. Seven awards were out in the comedy categories.

The ceremony had many cheering but left just as many infuriated when it came to the night’s comedy winners and losers. What were the upsets that left them absolutely bewildered? Which winners were they cheering for the most? And which defeats struck our users the hardest?

Below, you can take a look at a sampling of the praise and pointed criticism that was leveled at this year’s ceremony. Read more and have your say here.

BEST COMEDY SERIES
“Curb Your Enthusiasm”
“Dead to Me”
“The Good Place”
“Insecure”
“The Kominsky Method”
“The Marvelous Mrs. Maisel”
X “Schitt’s Creek”
“What We Do in the Shadows”

Pipipopo: OMGGGG full SC sweep! I wouldve been happy had they won actress, s. Actress, and series only. This is just amazing, SC just spoke to my heart.

Ivo Stoyanov: 7 out of 7 is my best prediction result ever for Comedy, am so happy that it happen for a LGBTQ+ show.

The BC 2.0: GRAB YOUR BROOMS!!!!! #SchittsSweep! Daniel Levy just made history – first person to win Emmys for Acting, Writing, Directing, and Producing ALL in the Same Night. Viva, Canada! (And then Kimmel made a hockey joke, lol…)

wilfredpickles: Schitt’s Creek really pulled off an Angels in America sweep! I wish I’d predicted it but so happy!

estrelas: Eugene won. Good for him and I’m very happy but I really thought Ramy would win. Damn…I guess Schitts is indeed sweeping.

Sir Shaw: A woman of certain age, my age. God I love her.

M: The Original: O’Hara was so overdue.

True Tenor: I may have cried a little. Soooooo elated for Catherine O’Hara. She gave a dynamite speech!

Atypical: I told u bitches Daniel Levy is the next Tina Fey and Phoebe Waller-Bridge!!!

willum: Daniel Levy has won the same amount of Emmys as his father

Stranger Among Us: So fucking happy for Annie she deserves it!

forwardswill: ANNIE FRIGGING MURPHY. OUR BREAKOUT IS A STAR

Stranger Among Us: Frankly the only Emmy tonight Schitt’s did not deserve was directing. Nothing comes close to Maisel’s direction but I’m not gonna complain because yay Schitt’s Creek!

Stranger Among Us: Omg so happy for Daniel.

Breaking Brad: I was really rooting for The Good Place or What We Do in the Shadows there but admittedly I still haven’t seen Schitt’s Creek. Man that looks like a mistake. I really didn’t think we’d see a sweep like this coming.