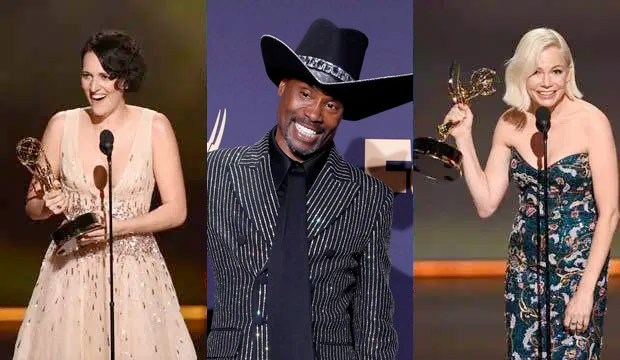 The Golden Globes are notorious for going their own way when it comes to rewarding TV winners, often ignoring rubber-stamping reigning Emmy winners (we’re looking at you, “Game of Thrones” and “Veep”). However, quality is quality and it’s likely the Hollywood Foreign Press Association’s list of 2020 winners will match up with the Emmys on at least a few occasions. In fact, there are exactly eight Emmy champs hoping to repeat at Sunday’s Golden Globes.

First and foremost is Amazon’s “Fleabag,” Phoebe Waller-Bridge‘s fan-favorite comedy that won over the Emmys in September. It’s hoping to claim prizes for Best Comedy Series and Best Comedy Actress from the HFPA just as it did with the TV academy, while supporting actor Andrew Scott could win after being strangely snubbed at the Emmys.

SEEGolden Globe predictions: Olivia Colman will suffer her first loss at the hands of Jennifer Aniston

Best Comedy Actor went to Bill Hader (“Barry”) on Emmy night for the second consecutive year, but he has yet to win a Golden Globe. Could all of that change on Sunday night? As a reminder, last year Hader lost the Globe to Michael Douglas (“The Kominsky Method”), who’s back in the running again.

“Game of Thrones” won its fourth Emmy Award for Best Drama Series, but isn’t eligible to repeat that victory at the Golden Globes since it was skunked when they announced their nominations. However, the Emmys’ two drama lead champs are hoping to hear their names called again: Billy Porter (“Pose”) and Jodie Comer (“Killing Eve”).

SEEWho are the 21 Golden Globe presenters announced so far for Sunday’s 2020 ceremony?

In terms of TV movies/limited series, “Chernobyl” won Best Limited Series while the lead trophies went to Michelle Williams (“Fosse/Verdon”) and Jharrel Jerome (“When They See Us”). “Chernobyl” and Williams are favorites to claim bookend prizes at the Golden Globes, while Jerome was cruelly snubbed.

Finally, Patricia Arquette (“The Act”) is the only supporting acting Emmy winner that could repeat on Sunday night. None of the other supporting champs were nominated at the Golden Globes: Tony Shalhoub (“The Marvelous Mrs. Maisel”), Alex Borstein (“The Marvelous Mrs. Maisel”) and Peter Dinklage (“Game of Thrones”) were snubbed, while Julia Garner (“Ozark”) and Ben Whishaw (“A Very English Scandal”) were eligible at last year’s kudos.