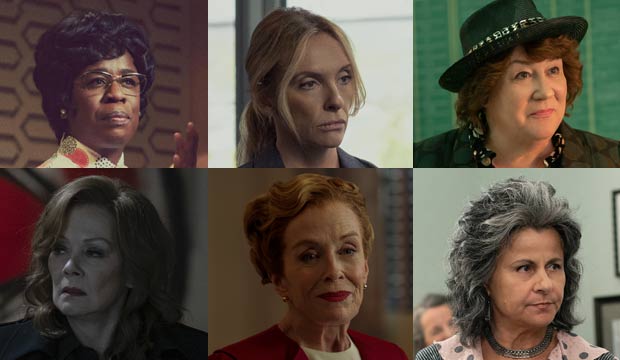 Aduba is entering the “Mrs. America” episode “Shirley,” which aired April 15 on FX. This is her fourth career nomination after winning twice for “Orange Is the New Black.”

Collette is entering the “Unbelievable” episode “Episode 6,” which streamed September 13 on Netflix. This is her fourth career nomination after winning once for “United States of Tara.”

Martindale is entering the “Mrs. America” episode “Bella,” which aired May 13 on FX. This is her sixth career nomination after winning once for “Justified” and twice for “The Americans.”

Smart is entering the “Watchmen” episode “She Was Killed by Space Junk,” which aired November 3 on HBO. This is her ninth career nomination after winning once for “Samantha Who?” and twice for “Frasier.” Enjoy our recent video chat with Smart.

Taylor is entering the “Hollywood” episode “Jump,” which streamed May 1 on Netflix. This is her eighth career nomination after winning once for “The Practice.” Enjoy our recent video chat with Taylor.

Ullman is entering the “Mrs. America” episode “Betty,” which aired April 22 on FX. This is her 27th career nomination after winning five times for her variety series and specials, once for “Ally McBeal” and once for “Love and War.”