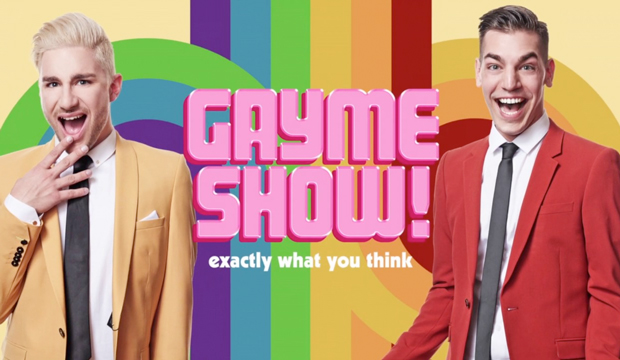 The competition series “Gayme Show” is perfectly suited for a streaming service like Quibi, served up in sweet, highly specific morsels of queer excellence. Comedians Matt Rogers and Dave Mizzoni host this goofy twist on a game show where, not unlike “Whose Line Is It Anyway,” everything is made up and the points don’t matter. Right from the start, you are greeted by Rogers and Mizzoni with the name of a pop star or actress, which naturally translates to “Salutations” in the case of Bebe Rexha, or “How is your family” for Dua Lipa. Straights in the audience may be lost at first but gay viewers will quickly feel seen. In each episode, two straight comedians are paired with either a Wise Queer (i.e., Guy Branam, Bowen Yang) or a Woman Who Gets It (Nicole Byer, D’Arcy Carden) in a series of challenges to test their appreciation of gay culture.

The most fun game is Celebrity Essences, where contestants are given three somewhat vague clues about a celebrity and are asked to guess who they are, typically an actress/icon like Nicole Kidman or Cynthia Nixon. Each episode is packed with witty pop culture-based humor, like an acting challenge to see who can convincingly act in a one-dimensional supporting role written for an otherwise talented actress, the kinds of “supportive wife” roles we see win Oscars all the time. Other challenges speak more broadly to the gay experience, like performing a dance in front of your discouraging father. At the end of the episode, one contestant, typically the one who had the most uninhibited fun, is crowned Queen of the Straights. Oh, and did we mention that criminally underrated “American Idol” alumni Vonzell Solomon sings the theme song and the stingers for all of the show’s transition points? As “SNL’s” Stefon might say, this show truly has everything.

While “Gayme Show” isn’t going to change the world, it is pure, dumb fun that comes from an authentic place. It is a celebration of all the little idiosyncrasies of being gay and obsessed with entertainment, worshipping actresses and knowing how to make an entrance. Rogers and Mizzoni are consummate hosts, their witty quips bouncing very naturally off of the straight contestants who may not know what they’re doing but are endearingly committed anyway. Episodes are only seven minutes long, which certainly leaves you wanting more, but it is one of the more entertaining ways to spend an hour of your time. Especially if, like Rogers, you have “seen Kelly Clarkson 12 times” or like Mizzoni, you “know Kyra Sedgwick.”