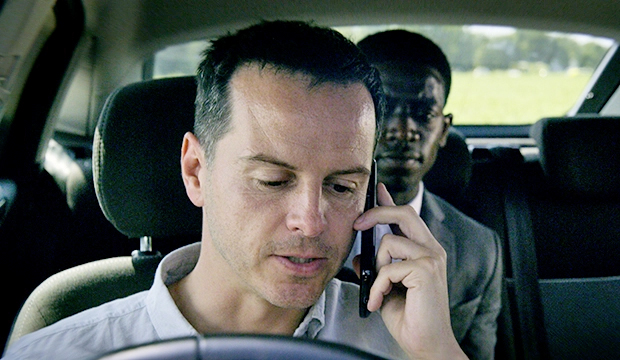 Egregiously snubbed at last year’s Emmys as the portrayer of “Fleabag’s” Hot Priest, Andrew Scott is back with his red-hot turn on “Black Mirror” installment “Smithereens.” As none of the fifth season’s three standalone episodes met the 75-minute runtime requirement to contend as a TV movie, the TV academy ruled the Netflix anthology a drama series for the first time, allowing Scott, who appeared in one of three, to compete as a guest actor. Celebrating his career-first Emmy bid in Best Drama Guest Actor, the Irish actor is “Black Mirror’s” sole representation at this year’s awards.

Scott plays Chris Gillhaney, a London-based rideshare driver who picks up and abducts an intern of the social media company Smithereen, Jaden Tommins (Damson Idris), initially convinced that he’s an important employee. After spotting a bag on Jaden’s head, two police officers engage in a car chase, which ends when Chris stalls the car in a field after trying to dodge two teenage cyclists. Bearing a gun, he holds Jaden hostage, threatening to pull the trigger if his demand to speak to Smithereen’s founder and CEO Billy Bauer (Topher Grace) isn’t met.

On a 10-day silent retreat, Billy isn’t readily available, but Chris is connected to the company’s U.S.-based chief operating officer Penelope Wu (Ruibo Qian). While putting him on hold, she and her team not only tap into the Smithereen app on his phone to listen in, but track the changes in his profile to help determine the source of his distress. They discover that he stopped using the app shortly after his fiancée died in a car accident caused by a drunk driver three years prior, which Penelope shares with the FBI and British police on the scene.

But there’s a twist. In a phone call with Billy – who (against Penelope’s advice) ends up reaching out – Chris reveals that he caused the accident by taking his eyes off the road when a Smithereen notification popped up on his phone. His main intention being to unload his guilt to the person whose app ultimately ruined his life, he shows little interest in Billy’s ensuing attempt at an apology. All that’s left is his suicide, which Jaden, after listening to Chris’ confession, tries to prevent by grabbing the gun from him. Believing Jaden is in danger, the police snipers fire into the car – but we never see who is hit.

Will Scott go one step further and turn last year’s snubbing into a victory? Let’s consider the pros and cons.

The capital L lead of his own installment, Scott could have a leg up over his five rivals – Jason Bateman (“The Outsider”), James Cromwell (“Succession”), Giancarlo Esposito (“The Mandalorian”), Ron Cephas Jones (“This Is Us”) and Martin Short (“The Morning Show”) – who are traditional guest stars with comparatively sparser screen time. If Emmy voters dutifully watch “Smithereens,” they will witness him do a 180 from the charming Hot Priest, as he dives headfirst into his troubled character. Throughout the 70-minute episode, he has multiple monologues to spout off, alternating between expressions of mania, sorrow and vulnerability. In Chris’ phone call with Billy, the manic hostage taker turns into a real human being, who is grief-stricken and left to stew in his own guilt following an ill decision. Under the old tape system, this is the type of emotional gut punch that would have catapulted Scott to the top of his category.

Scott infamously wasn’t among reigning comedy series champ “Fleabag’s” 11 Emmy citations last year, which left even drama guest actor winner Bradley Whitford (“The Handmaid’s Tale”) outraged. Ever since, Scott has been on a hot streak, collecting a Critics’ Choice Award win as well as Golden Globe and SAG bids for “Fleabag.” Since “Black Mirror’s” fifth season dropped on Netflix last June, it only helps that he appeared in a handful of projects throughout this past year, including Best Picture Oscar nominee “1917,” “His Dark Materials” and “Modern Love.”

While “Black Mirror” scared up three straight Best TV Movie wins for “San Junipero” (2017), “USS Callister” (2018) and “Bandersnatch” (2019), plus two Best Movie/Mini Writing victories (2017-18), it’s never produced an acting award for one of its performers. In fact, Jesse Plemons (“USS Callister”) and Letitia Wright (“Black Museum”) precede Scott as the only actors ever shortlisted for the series. The category switcheroo made it difficult for it to break through elsewhere this year, which could hurt Scott, who is one of just two nominees in his category to be his show’s only bid (Bateman being the other). Just ask last year’s nominee Kumail Nanjiani, who couldn’t triumph as “The Twilight Zone’s” only nom.

The last time an actor under the age of 50 reigned victorious in this category was in 2013, when Dan Bucatsinsky (then 47) won for “Scandal.” This could place Scott, 43, at a disadvantage, especially since all his five rivals are older than 50. Plus, this category likes to crown overdue actors who have never won an Emmy, recent examples including Jones in 2018, his “This Is Us” co-star Gerald McRaney in 2017 and the late Reg E. Cathey (“House of Cards”) in 2016. Esposito – who is also nominated for drama supporting actor for “Better Call Saul” – would be the only one whom this trend would favor this year.