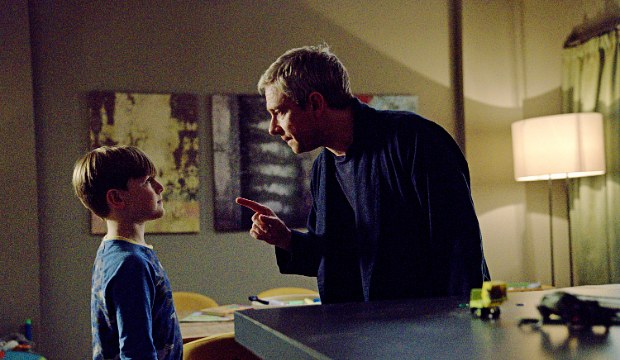 Between “Fleabag” and “Veep” having ended and “Atlanta,” “Barry,” “PEN15” and “Russian Doll” taking extended hiatuses, the comedy races at the Emmys this year are wide open, ready to embrace a breakout hit that the season has yet to deliver. The savior could be “Breeders,” a half-hour about parenting — not horses — that premiered its 10-episode debut season on FX this month, with each episode available on Hulu mere hours after its initial broadcast. Ratings ticked up this week for the fourth episode to the best viewership numbers since the pilot. The show is “certified fresh” on Rotten Tomatoes, which sums up the consensus from critics: “A provocative addition to the growing slate of shows about parents behaving badly, ‘Breeders” take on the realities of child-rearing are as hilarious as they are cringe-inducing.”

SEE our first slugfest on this year’s limited and movie races.

Emmy and BAFTA winner Martin Freeman stars with Daisy Haggard as Paul and Ally, parents of two young children in London, but this is not family-friendly entertainment. The obscenities hurled recall “Veep” in their elaborate vulgarity, but the victim here is prone to be an energetic toddler instead of a corrupt politician. It comes as no surprise that Oscar-nominated showrunner Simon Blackwell was a producer and writer on “Veep” for its first four seasons, winning Emmys for both duties. He is also a producer and writer on the debut season of “Avenue 5” that just aired on HBO, again under “Veep” creator Armando Iannucci.

“Breeders” differs from the Iannucci creations in how grounded it is; the real-world stakes allow for surprising depth from both comedic and dramatic standpoints. The early episodes received new context when the”No Accident” episode saw Paul and Ally investigated by social services — and high jinks ensued. Oscar and Emmy nominee Michael McKean plays Ally’s estranged father Michael and it is the greater focus on his character in later episodes that takes the show in the other direction, especially in the “No Dad” episode that sees him help his grandchildren cope with the death of their pet gerbil. This tonal balance further recalls “Catastrophe,” another American-produced half-hour comedy about London-based parents of two young children that also tackled weighty subjects like alcoholism and death. The Television Academy nominated “Catastrophe” in Best Comedy Writing its first year in 2016, then nominated Carrie Fisher posthumously for Best Comedy Guest Actress the next season.

SEE our first slugfest of the season on the drama races.

Simon Blackwell created “Breeders” with fellow executive producers Chris Addison and Martin Freeman, who gets an additional credit on screen for having the “original idea.” A Directors Guild Award winner and two-time Emmy winner for “Veep,” Addison directs the five episodes in the second half of the season after co-executive producer Ben Palmer takes the first half. Co-lead Daisy Haggard does not have additional credits on “Breeders,” but she stands to contend against herself in the Emmy race for Best Comedy Actress, as well as against Blackwell in Best Comedy Series and Writing, all for “Back to Life,” which Showtime aired in the fall.