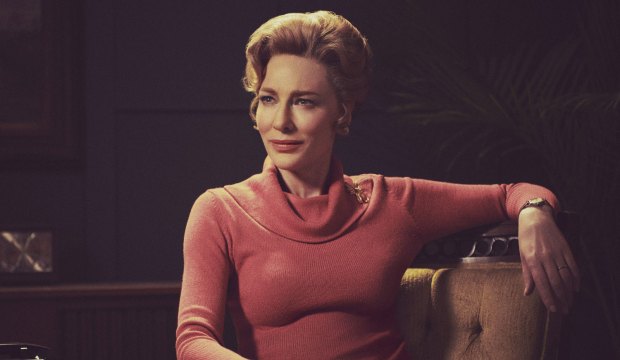 TV, VOD and streaming are where it’s at this year when it comes to entertainment viewing options. Actual movie theaters? Not so much, given that the coronavirus pandemic is forcing us to socially distance from one another. But more than a few major big-screen female talents who have at least one Oscar on a shelf are in contention for Emmys — some with multiple chances this year to compete on the ballot. Check out which illustrious actresses are in the running.

Olivia Colman — The British actress won a lead Oscar for her somewhat addled 18th-century Queen Anne who pitted two of her ladies in waiting against one another in 2018’s “The Favourite.” She was Emmy-nominated for her supporting role in AMC’s “The Night Manager” in 2016 and for her part as the title character’s passive-aggressive stepmother on the second season of  Netflix’s “Fleabag” in 2019. This year, she will likely be nominated as the middle-aged Queen Elizabeth II in Netflix’s “The Crown.”

Cate Blanchett — This Aussie actress has two Academy Awards, one for her supporting role as actress Katharine Hepburn in 2004’s “The Aviator” and the other as the lead in 2013’s “Blue Jasmine.” Her Emmy chances include her role as Phyllis Schlafly, an anti-feminist conservative leader who rose to power in the ’60s and ’70s in the Hulu miniseries “Mrs. America,” which she also executive produced. Blanchett might also compete for her voice work as a dog psychologist on an episode of “The Simpsons.”

Reese Witherspoon —  The actress won a lead Oscar in the 2005 biopic “Walk the Line” as country singer June Carter Cash and was also nominated for her 2015 biopic “Wild.” She has three opportunities to win an Emmy as a lead actress this year with the second helping of HBO’s “Big Little Lies,” the Apple TV+ series “The Morning Show” and Hulu’s “Little Fires Everywhere.” Witherspoon is also an executive producer on each of her shows and won a trophy in 2018 when “Big Little Lies” won the miniseries/ TV film category.

Meryl Streep — Oscar’s favorite leading lady with a record 21 nominations has won three Academy Awards: a supporting trophy for 1979’s “Kramer vs. Kramer” and two as a lead in 1982’s “Sophie’s Choice” and another for her portrayal of Margaret Thatcher in 2011’s “The Iron Lady.” But her first career honor was an Emmy for her lead role in the 1978 miniseries “Holocaust,” which was followed by an Emmy for the 2003 HBO miniseries “Angels in America” and for her narration of the 2017 documentary “Five Came Back.” She could claim a fourth for her spiteful mother-in-law in the second season of HBO’s “Big Little Lies.”

Laura Dern — Dern just won a supporting Oscar for her no-nonsense divorce lawyer in the 2019 Netflix movie “Marriage Story.” She was bestowed with her first Emmy in 2017 for her role as Renata Klein in “Big Little Lies” after being nominated for her TV work five times previously. She might just repeat her win for the show’s second season given that her rich and successful business woman learns that her husband is arrested for fraud and they are on the verge of bankruptcy. As a result, she loudly utters one of the best lines of the TV season as she shames her husband while shouting, “I will not not be rich.”

Regina King — The actress won a supporting Oscar for 2019’s “If Beale Street Could Talk” as a protective mother trying to free her daughter’s boyfriend from jail after he is wrongly accused of raping a woman. She has received three Primetime Emmys, two for her supporting roles on ABC’s “American Crime” anthology series in 2015 and 2016 and one as a lead for Netflix’s 2018 limited series “Seven Seconds.” She could take home a fourth trophy for her portrayal of Angela Abar/Sister Night, a Tulsa police detective who wears a nun’s habit and a balaclava on HBO’s “Watchmen.”

Anne Hathaway — In 2012 Hathaway won a supporting Oscar for her role as Fantine, the tragic factory worker who turns to prostitution and sobs her way through “I Dreamed a Dream,” the showstopping number from the musical “Les Miserables.” She also won a 2010 voice-over Emmy for crooning “Moon River” as a princess on “The Simpsons.”  She warbles again on Amazon’s anthology series “Modern Love” as a lawyer who suffers from untreated bipolar disorder. During a manic episode, she heads to the produce section of a supermarket and starts to sing and dance while flirting with a handsome shopper. Of all the eight episodes based on a New York Times column, Hathaway’s entry especially stands out.

Gwyneth Paltrow — Before she was a Goop mogul, Paltrow snared a Best Actress Oscar for her work in 1998’s “Shakespeare in Love.” She also has a 2011 Emmy as a guest actress on the Fox comedy “Glee.” She could be in the running this year for her role on Netflix’s “The Politician” as star Ben Platt‘s adoptive mother Georgina Hobart. She is also an executive producer on the series.

Viola Davis — After being nominated for her secondary role in 2008’s “Doubt” and as a lead in 2011’s “The Help,” the actress won a supporting Oscar for her role as a dedicated wife and mother in 2016’s “Fences.” She won a lead Emmy the year before for ABC’s “How to Get Away with Murder” and has been nominated three other times since for her role as law professor Annalise Keating on the show. Davis also competed as a guest actress for playing Annalise on ABC’s “Scandal” in 2018. This year, she could earn a ballot spot for the sixth and final season of “Murder” and also for the Amazon film “Troop Zero.”

Nicole Kidman — She’s the first Australian actress to win a lead Academy Award  for her performance as writer Virginia Woolf in 2002’s “The Hours.” She was nominated as a lead in 2002’s “Moulin Rouge!” and 2011’s “Rabbit Hole as well as for her supporting role in 2017’s “Lion.”  She earned her first lead Emmy nomination in the HBO film “Hemingway & Gellhorn” as Ernest Hemingway’s journalist wife. She won a Lead Actress trophy in 2017 as an abused wife in the HBO series “Big Little Lies” and took home a prize as an executive producer on the show. She returned for a second season and could be nominated again.