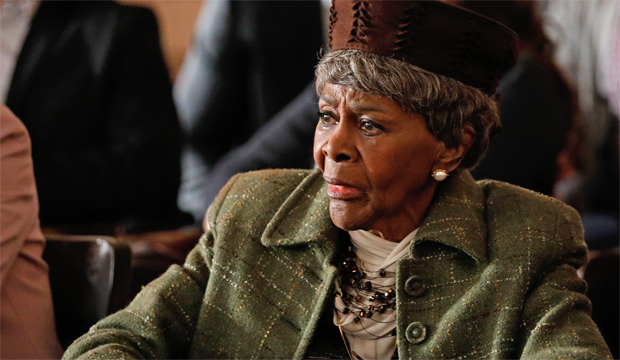 After accruing her fifth Best Drama Guest Actress Emmy nomination for her turn as Ophelia Harkness in the sixth and final season of ABC’s “How to Get Away with Murder,” Cicely Tyson now holds the record for the most bids in this category. And if setting one record wasn’t already enough, the actress could set one of the following two in September: If she triumphs at 95, she’ll become the oldest winner in this category; if she doesn’t, she’ll be the single performer with the most bids without a win.

The episode she has submitted for consideration to Emmy judges is the series closer “Stay.” Ophelia returns to Philly to attend her daughter Annalise’s (Viola Davis) trial, as she faces multiple murder charges, including that of her husband Sam (Tom Verica). On the evening before her closing statement, Annalise queries whether she’s even worthy of an acquittal, but Ophelia keeps her daughter’s doubts at bay with an explicit reminder that only God possesses the right to decide, so her one and only, indisputable duty is to “show up.” And she does, with a raw, compelling argument that prompts the jury to find her not guilty of all charges, to her mother’s utmost relief. Finally, the show’s closing montage (which jumps ahead in time) boasts Annalise and her sister Celestine (Gwendolyn Mulamba) mourning Ophelia’s eventual passing.

At long last, will Tyson finally get away with the statuette for “Murder”? Let’s dive into the pros and cons.

The actress had two episodes to choose from this season: the 11th outing, “The Reckoning,” and “Stay.” Her comparatively sparser screen time in her submission doesn’t stop her from packing a punch, specifically in her scene opposite Davis. In the former episode, Ophelia cites her absence during Annalise’s childhood as the cause for her tendency to rely on herself. So when Annalise expresses self-doubts on the eve of her life-changing closing argument, Ophelia steps in and offers the motherly guidance of which Annalise was deprived in her childhood. Accordingly, Tyson underscores her motherly warmth and authority with a palpable sense of outright anxiety, which crystallizes in her poignant delivery of her final line, “You hear me?!” Even if Tyson’s work shines best if viewed across both her episodes, the finale works as a perfect standalone entry, as it sees her arc come to a close and reaches an emotional apex with her passing.

After being nominated five out of six times for this show, Tyson is due for the win. She missed out once on a nom in 2016, but she was also on the ballot for acting juggernaut “House of Cards” that year and likely split her own vote. While the now 16-time nominee is already a three-time champ, her last victory dates back to 1994, when she triumphed for “The Oldest Living Confederate Tells All” in Best Movie/Mini Supporting Actress (her other two Emmys are for 1974’s TV Movie “The Autobiography of Miss Jane Pittman” in Best Movie/Mini Actress and Actress of the Year). This is voters’ last chance to reward her for “Murder,” and what better way to bid goodbye to the legendary actress’ fan-favorite turn than with a long-awaited statuette.

SEE Cicely Tyson reflects on ‘How to Get Away with Murder’ and working with Viola Davis: ‘I will miss her deeply’ [EXCLUSIVE PODCAST INTERVIEW]

Emmy voters aren’t always sentimental, let alone aware of records that could be broken with a potential win or loss. Hence, Tyson could pull a Diana Rigg, who tried to win on her final try for “Game of Thrones” in 2018, but fell to “The Handmaid’s Tale’s” Samira Wiley, a loss thanks to which she currently ties Tyson for the aforementioned uber-unfortunate title with four noms without a win. First place in our combined odds, Tyson was already once the projected front-runner for “Murder’s” debut installment in 2015, when the show was still a shiny new object and Davis managed to snag the Best Drama Actress award, but she ended up losing to “The Americans’” Margo Martindale.

The three-time reigning champ in this category, “Handmaid’s” is back in the running this year with 2017’s winner Alexis Bledel, who appeared in five episodes of her eligible season and had a heartrending storyline, as her character Emily navigates life as a refugee in Canada. “Succession’s” Cherry Jones (the incumbent winner for “Handmaid’s”) and Harriet Walter, “Orange Is the New Black’s” Laverne Cox and “This Is Us’” Phylicia Rashad round out the category, all of whom also have factors working in their favor. While Jones and Walter could benefit from being in the Best Drama Series front-runner – which tied “Ozark” as the most nominated drama series with 18 bids – four-time nominee Cox and five-time nominee Rashad could both ride an overdue narrative to a victory as neither has won a Primetime Emmy.