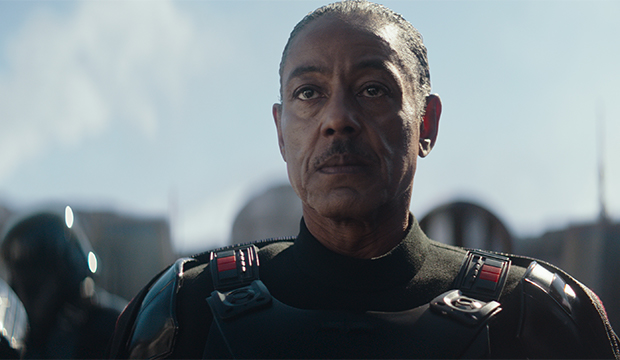 Giancarlo Esposito shocked many Emmy pundits when he landed dual nominations this year. His Drama Supporting Actor bid is for Emmy stalwart “Better Call Saul,” his second consecutive nom for that show (he has one previous nomination for “Saul” mother series “Breaking Bad” in 2012). But the bigger surprise is his Drama Guest Actor nomination, which is thanks to his work as villainous Moff Gideon on the Disney+ series “The Mandalorian.” He submitted the Season 1 finale, “Chapter 8: Redemption,” for consideration.

The episode picks up with Moff Gideon, former officer of the Empire, having hunted down and trapped Mando/Din Djarin (Pedro Pascal) and his small band of heroes inside a cantina. Gideon intimidates the survivors with an army of stormtroopers and commands them to surrender. Droid IG-11 (voice of Taika Waititi) arrives and attacks the troopers providing Djarin and company cover. A deadly battle ensues with Gideon shooting Mando in the neck before he escapes into the sewers.

Gideon returns later flying a TIE Fighter, in hopes of ending Djarin. The Mandalorian uses his jet pack and grappling gun to latch onto the ship and the pair careen through the air before Gideon’s fighter is brought down. In the final moment of the episode, Gideon cuts through and escapes his crashed ship with a glowing black lightsaber.

Let’s take a look at the pros and cons of this submission.

Esposito’s first appearance in the episode directly follows the opening sequence. It is a tense standoff moment, where Moff Gideon has the heroes surrounded. Backed by an army of stormtroopers and a huge gatling gun, he displays a sense of calm menace as he threatens Din Djarin (and speaks Mando’s name for the first time). The scene displays a fantastic use of economy from the actor, who establishes his character as an intimidating threat through his stance and commanding voice.

Esposito also gets the final scene of the episode (and the season)! He emerges from his wrecked starfighter holding the “Darksaber,” making for the most discussed moment of “The Mandalorian” (apart from Baby Yoda memes), because the ancient weapon is important in “Star Wars” lore. It’s likely that the final shot of Esposito generated more online chatter than anything his fellow nominees did.

This is one of two surprise Emmy nominations for Esposito this year, as he is also nominated for “Better Call Saul.” These unexpected bids speak to the actor’s respect and popularity among his peers. The unexpected popularity of “The Mandalorian” with voters signals that the series is primed to claim a few trophies.

Esposito has quite limited screen time as Moff Gideon, who was only introduced at the end of the previous episode. After the battle scene near the beginning, he only returns at the very end to attack the heroes in his TIE Fighter. He’s still a terror in the high flying scene, but the actor has no dialogue in this sequence.

This episode of “The Mandalorian” is arguably the most action packed of the season. Emmy voters tend to be drawn to performers who get lots of emotional breakdowns or epic monologues, rather than those who ooze cool confidence during fight scenes. Esposito spends more time fighting and shooting than talking.