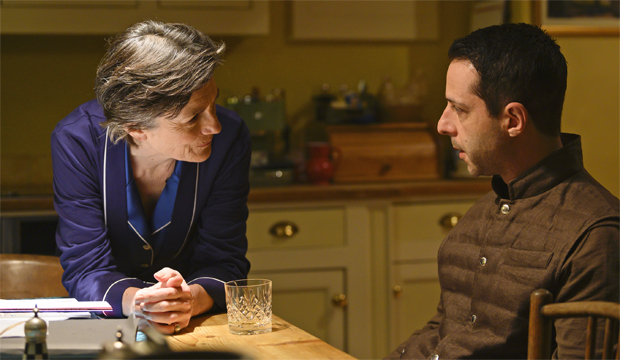 “The chiseling begins,” Dame Harriet Walter’s Lady Caroline Collingwood laments as she sits down for a negotiation with her son Roman (Kieran Culkin) and daughter Shiv (Sarah Snook) in “Return,” the Season 2 episode of HBO’s “Succession” that Walter submitted for Emmy Awards consideration. A first-time Emmy nominee this year, Walter boasts over 100 film and TV credits but is best known for her prolific work on stage with the Royal Shakespeare Company and the National Theatre. Her 2020 Emmy nom is for Best Drama Guest Actress.

In her previous appearances on “Succession,” Walter’s Caroline––the ex-wife of the show’s center-of-gravity Logan Roy (Brian Cox) and mother to three of his four children––has been a wise-cracking, whimsical presence who couches her resentments in thinly-veiled barbs and maternal niceties. In “Return,” Caroline has a much more substantial role, as her financial stake in Logan’s media conglomerate Waystar Royco threatens the family’s control of the company in their ongoing proxy battle. When Logan learns that Caroline plans to vote against the family, he dispatches Roman and Kendall (Jeremy Strong) to the UK to keep her in line––no matter the cost.

Will Walter’s delightfully nonchalant but shrewd matriarch––who Shiv lovingly refers to as the “wicked bitch of the West”––score the legendary actress her first Emmy win? See the pros and cons of Walter’s submission below.

Lady Caroline plays an integral role in “Return” and Walter brings so much depth to her understated character. Armed for battle when Roman and Shiv visit, Walter plays mother by serving them an old-fashioned family dinner before launching directly into the negotiations. It’s an unusual dinner scene for “Succession,” a family conversation stripped of almost any pretense, and Walter presides over the discussion with a disarmingly gentle yet commanding presence. Walter later shares an intimate scene with Strong in which Kendall wants to tell Caroline about his car accident at Shiv’s wedding, but Caroline demurs. Reluctance is written all over Walter’s body language, from her fingers twirling the string of her teabag to her clenched teeth and sideways glances. Walter’s brilliant, subtle performance reveals that despite Caroline’s familial instinct, she altogether lacks maternal warmth.

After snubbing “Succession” for its first season, the acting branch showered the sophomore series with nine acting nominations this year, suggesting that many voters just recently caught up with the show and will have both seasons on their minds when they vote. Walter made two appearances in the first season and those performances could factor into this year’s race. In “Pre-Nuptial,” Walter hilariously mingles with guests at Shiv and Tom’s (Matthew Macfadyen) wedding rehearsal, asking everyone she meets how long they think the marriage will last. And in “Nobody Is Ever Missing,” Caroline toasts Shiv, joking that they don’t see eye to eye because her father stowed her away across the Atlantic. In both cases, Walter’s lacerating wit shines through, but she also steeps Caroline’s humor in antipathy and regret.

Walter had a particularly busy year on television, appearing not just on “Succession” but also in a supporting role on the Emmy-favorite series “Killing Eve” and in a leading role on the Julian Fellowes’ miniseries “Belgravia.” Acting branch members who like either of these other shows––especially those who love “Killing Eve”––might vote for Walter in Drama Guest Actress as a way to recognize her overall body of work this season.

Although impactful, Walter has very limited screen time in “Return.” Caroline doesn’t appear until almost 45 minutes into the hour-long episode and, even then, she only has two scenes. Voters who re-watch the episode might feel Walter has too little material to warrant a victory, though that hasn’t hampered previous champions in this category like Margo Martindale.

Drama Guest Actress is an especially competitive category this year and Walter faces off against a legendary line-up that includes small-screen royalty Phylicia Rashad (“This Is Us”) and Cicely Tyson (“How To Get Away With Murder”), recent Emmy winner Alexis Bledel (“The Handmaid’s Tale”), and frequent nominee Laverne Cox (“Orange Is The New Black”). Her biggest competition could very well be “Succession” co-star Cherry Jones, who won in this category last year for her turn in “The Handmaid’s Tale.” Even though acting-branch support for “Succession” seems particularly strong, Jones and Walter may end up splitting the vote among the show’s fans.