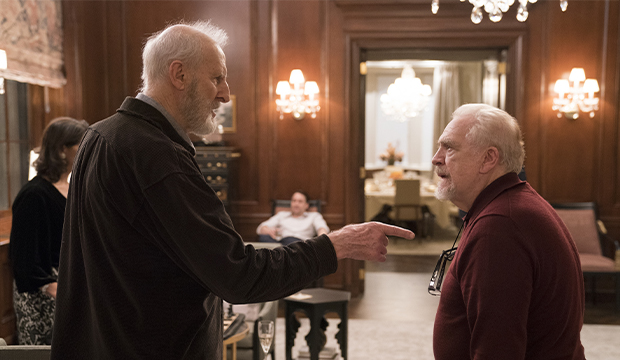 “Time to pay up,” James Cromwell’s Ewan Roy ominously warns his younger brother Logan (Brian Cox) in the final moments of “Dundee,” the second season episode of “Succession” that Cromwell submitted for Emmy Awards consideration. Last month, he earned his career-fifth Emmy nomination for his recurring role on the celebrated HBO drama series, his first bid since his 2013 victory for “American Horror Story: Asylum.” His nomination is for Best Drama Guest Actor.

In each of Cromwell’s guest appearances on “Succession,” his virtuous, erudite character Ewan spars with his estranged brother Logan, the Machiavellian head of media conglomerate Waystar Royco. Cromwell’s submission “Dundee” is no exception, as Ewan and Logan trade vicious barbs during a visit to their hometown in Scotland, where Logan will be feted for his 50 years in business. Though Ewan still holds a board seat, he seizes on the family reunion to pressure his grandson Greg (Nicholas Braun) to resign from the company or risk losing his $250 million inheritance.

Might Cromwell’s deliciously acerbic take-downs of his younger brother––like his all-time great comparison of the Logan Roy School of Journalism to a Jack the Ripper women’s health clinic––lead him to a second Emmy victory come September? Let’s take a look at the pros and cons of his submission.

Cromwell has become a fan-favorite character on “Succession” for his caustic rebukes of Logan and the treacherous Roy clan, but he brings so much more to the role in “Dundee.” In scenes opposite Cox and Braun, the actor delivers his biting one-liners with a world-weariness that makes Ewan simultaneously funny and devastating. While he clearly relishes the opportunity to eviscerate Cox’s domineering character, he also emphasizes Ewan’s virtues as he cuts through the complex machinations of the show with a moral clarity with which the audience immediately sympathizes. And despite their open disdain for one another, there’s a fleeting moment when the brothers bond over their childhood birdwatching that’s genuinely heartwarming.

The actors branch clearly discovered “Succession” during its second season––it went from zero to nine nominations year-over-year—which means voters will likely have the entire series on their minds as they cast their ballots. Cromwell has two excellent episodes in the first season they might remember when they watch “Dundee.” In “I Went to Market,” Ewan takes a hysterical 12-hour drive with Greg to visit his ailing brother for Thanksgiving, but leaves enraged, declaring, “This whole family is a nest of vipers.” In the next installment, “Which Side Are You On?,” he makes a rare appearance at a Waystar Royco board meeting to shockingly vote “no” on Kendall’s (Jeremy Strong) coup attempt against Logan. If voters take into consideration all three of Cromwell’s episodes, he could easily prevail.

Though Cromwell delivers some of the most memorable lines of “Dundee,” he has very little screen-time. Ewan doesn’t appear until halfway through the episode and only has three short scenes. Much of the hour instead revolves around the escalating Waystar Royco cruise-line scandal and the increasingly hostile contest between Shiv Roy (Sarah Snook) and Rhea Jarrell (Holly Hunter) to be named CEO. Cromwell gets the last lines, condemning Logan’s “empire of shit” and nodding to his potential involvement with the company whistle-blower moments before his brother unveils his lifetime achievement plaque, but with so many other monumental storylines unfolding, voters may feel he has too little impact to win.

Cromwell faces particularly strong competition in Drama Guest Actor. Though “Succession” has the most acting-branch support amongst drama series, his fellow nominees have other advantages. Some voters may want to award Andrew Scott (“Black Mirror”) after snubbing him for last year’s Emmy-juggernaut “Fleabag.” Giancarlo Esposito (“The Mandalorian”) and Jason Bateman (“The Outsider”) are double contenders this year and may garner votes here instead of their Primetime categories. And Martin Short (“The Morning Show”) and Ron Cephas Jones (“This Is Us”) are Emmy-winning industry veterans in popular series, just like Cromwell. Any one of these actors have a decent shot at the prize.