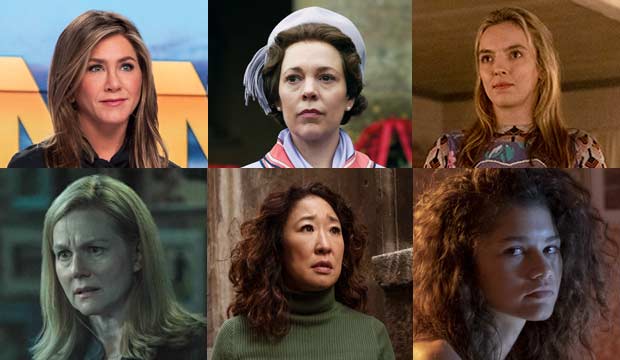 Not so many years ago, Emmy winners of Best Drama or Drama Actress used to prevail because they submitted an especially powerful sample episode of their TV series to a small jury comprised of 50 to 100 peers, who could only judge four categories at most. The strongest roles almost always won – like Sela Ward (“Once and Again,” 2008) and Patricia Arquette (“Medium,” 2005) — even if they’d been discounted by clueless award prognosticators.

But radical new voting changes have been enacted in recent years, permitting all 2,000+ members of the TV academy’s acting branch to cast ballots in all acting races. Sure, voters are still required to check off a box on their ballot attesting that they’ve viewed all episodes of all nominees, but that’s crazy to assume that all voters really did so.

So now seasoned Emmy-watchers wonder: How much do the sample episodes matter any more? Do they truly impact voters?

Each year attributes more and more programs and nominations to streaming services, easing accessibility for voters to rewatch shows. Which, in a year with limited word-of-mouth dialogue, fewer billboard sightings due to decreased commuting, and forced couch potato status will likely affect this year’s results in unforeseen ways. If the majority of voting members watched entire seasons instead of just the minimum of one episode, close races could totally flip. For example, keep your eye on Lead Actor in a Comedy and Drama, Supporting Actress in a Limited Series and Comedy, and Lead Actor in a Limited Series, where popular opinion could sway votes toward the underdogs.

Another intense category, which is still too close in Gold Derby statistics to call it, is Lead Actress in a Drama Series. Laura Linney has a slight edge over Jennifer Aniston and Olivia Colman, but they all hold a strong hand. Each of the top contenders has won at least one Golden Globe and Emmy previously.

Olivia is the only one who has won an Oscar, but based on past winners, this doesn’t seem to give her a noticeable advantage. The last Academy Award-winning Actress to win an Emmy was Sally Field in 2007; Viola Davis would win her Oscar for “Fences” the year following her Emmy success in 2015. Laura is the most victorious of the three, having won four Primetime Emmys and two Golden Globes. Olivia has gone 4 for 4 in winning all of her nominations for three Golden Globes and one Academy Award. She even won for this same nominated performance at The Golden Globes in January. These two award shows rarely share winners in the same year, but it’s not out of the question. Claire Foy and Elizabeth Moss flip-flopped wins in 2017 and 2018, but the last time wins aligned was for Claire Danes in both 2012 and 2013. And last but not least, a win for Jen at this Emmys would close an 18-year gap between her previous Emmy and Golden Globe wins for “Friends” in 2002 and 2003, respectively.

In terms of performances, Olivia has taken over for Foy, who previously won the Lead Actress Emmy for playing a younger version of Queen Elizabeth II on “The Crown.” Laura has reprised her role of Wendy Byrde in “Ozark,” for which she was nominated last year but lost to the villainous Jodie Comer. And Jen, playing co-host Alex Levy on the titular “The Morning Show”, is the newcomer here promoting the premiere series for Apple TV+. Whether you’re new to any of these names (if you are, please share your quarantine bunker secrets) or have thoroughly binged all of these shows, it doesn’t take long to realize that all three of these women are deserving of the prize.

Based on the episode each actress submitted as encapsulating their best performance of the season, Jen has the loudest, most expressive of the group. In the pilot, she reacts to and copes with the news that her co-host has been accused of sexual misconduct by multiple women at her workplace. So as her return to the small screen in a leading role, she stakes her claim as a force to be reckoned with. Laura and Olivia have much more subdued roles with less airtime in their respective episodes. As a mother with a money-laundering, drug cartel side hustle, her role is mostly reserved for calculated, nuanced acting instead of big moments. In her chosen, penultimate episode, she has to navigate family drama and take care of her problematic brother before making the hardest decision of her life. For Olivia’s finale episode, she battles with managing her sister’s conflicting love life while preparing for the Silver Jubilee.

When Olivia is on screen, her presence demands the viewer’s full attention, delivering precision and effortless charm in every movement. However, Helena Bonham Carter as Princess Margaret is featured more. Watch for her potential win in another heated race against Julia Garner, who won last year for her boldly playing Ruth Langmore in “Ozark,” Meryl Streep (her dinner table scream alone is remarkable) in “Big Little Lies,” and an equally deserving sly Sarah Snook in “Succession.”

I would be remiss to not even mention Zendaya here, who is an exceptionally worthy and thankfully not overlooked addition to the category. While “Euphoria” definitely doesn’t appeal to the masses of Emmy voters, it is a powerful show about some heavy teen subject matter that Zendaya single-handedly navigates with ease.

So who should win? Historically, the Emmys have awarded both new and repeat nominees, so there’s no surefire bet here. The Gold Derby favorite is Laura Linney. Jennifer Aniston would pull off an extreme upset as the dark horse throughout this entire race. But would I love to see another tear-jerking yet hilarious acceptance speech from Olivia Colman? Absolutely!

Make all of your predictions on Gold Derby and keep your eye on all of the Creative Emmys happening before the big event this Sunday!