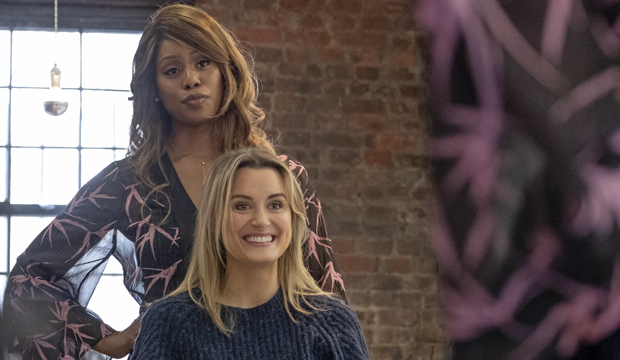 Laverne Cox notched her fourth Emmy nomination this year for her portrayal of Sophia Burset on “Orange Is the New Black.” Her bid in Best Drama Guest Actress is for the episode “God Bless America,” from the Netflix show’s seventh and final season. Cox made history in 2013 as the first openly transgender person to be nominated for an Emmy in any acting category, also earning kudos in 2017 and 2019.

In “God Bless America,” Cox has two scenes as Sophia. In the first scene, Sophia is visiting her parole officer, who also happens to be the same officer as Piper (Taylor Schilling). Sophia humorously shades Piper, who she hasn’t seen since leaving prison, for having the same basic hairstyle as she remembered. She agrees to help Piper for a gala event, as we see in Cox’s second scene. We discover that Sophia now owns a hair salon, achieving her greatest dream. At the salon, she goes back and forth with Piper about the latter still maintaining a relationship to a prisoner, telling her she should move on. Sophia says she does not look back and dwell on her prison experience.

So, after four nominations, can Cox finally win her Emmy? Let’s weigh the pros and cons.

Cox has endured as an Emmy favorite since the very first season of “Orange Is the New Black,” and this is now the final opportunity to actually reward the actress for her history-making performance. Rain Valdez is the only other openly trans actress nominated for an Emmy this year (in Best Short Form Actress) but no other trans actors from a comedy, drama or limited series — including the celebrated trans actresses from “Pose” — were honored. It is possible that voters may want to make up for their omissions by finally giving Cox the award this year.

As short as Cox’s screen time is in “God Bless America,” she really makes the most of it, infusing Sophia with the effervescent energy viewers fell in love with in Season 1. While no longer a series regular on “Orange Is the New Black,” she falls right back into the old rhythms of the show as she banters with Piper. Plus, Sophia’s storyline allows us to see a happy ending for a trans character onscreen, which is sadly still a rarity in this media landscape. Voters may wish to reward an actress and storyline that contributes positively to the depiction of trans individuals in media.

Unfortunately, the lack of Emmy love for “Orange Is the New Black” overall could make this an uphill battle. Among her competitors in Best Drama Guest Actress, there are actresses from “The Handmaid’s Tale,” “Succession” and “This Is Us,” shows the academy clearly has more passion for at this point, on top of the legendary Cicely Tyson from “How to Get Away with Murder.” Cox is the only representation at the Emmys for the final season of “Orange Is the New Black,” just like she was at last year’s awards.

Screen time may also be an issue for Cox, with only two short scenes in an hour-long episode. If voters are paying close attention to the episode submissions, Cox’s competitors simply have more to do and have greater opportunities to stand out. However, we’ve seen in recent years that a lack of screen time doesn’t always matter in the guest categories (Margo Martindale, Cherry Jones) so anything is possible, especially in an unpredictable year like 2020.