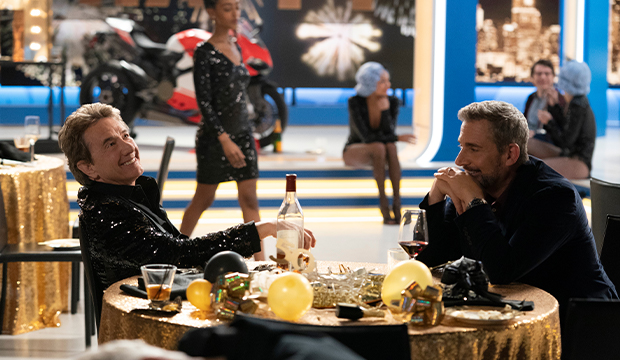 Returning to the Emmys as an acting nominee for the first time in 10 years, Martin Short is back in (pun intended) dramatic fashion despite being known as a comedy legend. Short’s nomination for Drama Guest Actor is his first solo nod since he was up for Drama Supporting Actor for his work in “Damages” in 2010. He appears only twice in his stirring turn as a sexual predator director in “The Morning Show,” the first of which is in the nominated episode “Chaos Is the New Cocaine.”

Recently ousted as the longtime and beloved host of the titular morning talk show, Mitch Kessler (Steve Carell) meets with friend Dick Lundy (played by Short) to discuss their shared woes as men taken down by the #MeToo movement. In just this one scene of his nominated episode, Short shows the layers of Lundy’s dark past and inhumanity as he unveils them to a shocked Kessler. He plays Lundy as a man so unapologetic in his transgressions and abuse, including an admission of underage rape, that he serves as the mirror Carell’s lead character is hoping to not see himself in.

With by far the most unlikeable character nominated in the Drama Guest Actor category this year, can Short come out on top for his first solo Emmy win? Let’s look at the pros and cons.

Already an Emmy champ, this would be Short’s first ever solo win. He first won as a part of the “SCTV Network 90” writing team in 1983 and again as performer/host of the Variety Special winner “AFI Life Achievement Award: Mel Brooks” in 2013. Comparatively, he was previously nominated only three times for his solo work, but never won: in 1998 for “Merlin,” 2003 for “Primetime Glick” and 2010 for “Damages.” This is Emmy’s chance to recognize the comedy legend for a rare dramatic turn that shows his range as an actor, and more importantly to give him a win only he can call his own.

As a “Saturday Night Live” alum, Short could benefit from recent love for the series as well as newfound appreciation for the sketch comedy genre in general. In 2009, “SNL” hosts and performers were allowed to compete in the guest categories after decades of being relegated to the Individual Performance in a Variety or Music Program field. Since then the show has won 10 guest races and four supporting races, showing a ton of love for the work that sketch comedy actors do. Short is an icon in that world and gets a huge boost for being a pioneer in a field shown so much awards love recently.

Apple TV Plus is new to the Emmy game and without a Drama Series nomination one could argue that it underperformed at earning nominations. The bulk of the show’s eight nominations were in acting (which is a pro for Short), but the con is that his is the least likely to stand out. Jennifer Aniston is the show’s biggest talking point and she could very well win for Drama Actress, but its biggest hope is current frontrunner for Drama Supporting Actor, Billy Crudup. Aside from them, Steve Carell and Mark Duplass are in contention with much showier performances.

In this category with Short are recent Emmy darlings, most of whom have been recognized for other acting work in the last decade. Jason Bateman (“The Outsiders”) was nominated this year and the previous two as Drama Actor in “Ozark,” James Cromwell (“Succession”) won Movie/Mini Supporting Actor in 2013 for “American Horror Story: Asylum,” Giancarlo Esposito (“The Mandalorian”) competed this year and last as Drama Supporting Actor for “Better Call Saul” and for “Breaking Bad” in 2012, and  Ron Cephas Jones is on his fourth straight bid for work in “This Is Us,” including a win in this category in 2018. Short, meanwhile, was last nominated for an acting Emmy in 2010. Andrew Scott, the outlier here, is on his first nom for “Black Mirror,” but was a huge part of last year’s Comedy Series winner “Fleabag,” for which he was noticeably snubbed.