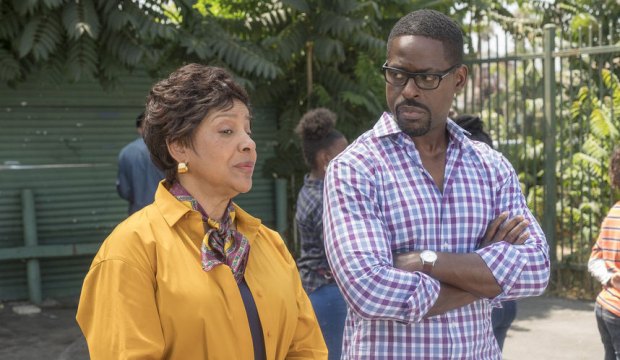 This has to be her year, right? On her fourth career nomination last year, legendary film, TV and stage actress Phylicia Rashad was hoping to rake in her very first Emmy victory thanks to her guest role on “This Is Us,” but she ended up falling to “The Handmaid’s Tale’s” Cherry Jones. This year, she is back in the running for the NBC hit in the Best Drama Guest Actress category, ready to give it another go and finally strike Emmy gold with the help of her submission “Flip a Coin,” Season 4’s fourth outing.

We first meet her character Carol Clarke in Rashad’s 2019 submission “Our Little Island Girl” as Beth Pearson’s (Susan Kelechi Watson) mother, who is exceedingly strict about the life she foresees for her daughter. The Clarke family goes through a rough patch when Beth’s father Abe (Carl Lumbly) is diagnosed with terminal lung cancer, of which he eventually dies. After holding her tongue around her mother for most of her life, present-day Beth finally snaps, which leads to a heart-to-heart conversation in which Carol offers an apology for curbing Beth’s dreams of becoming a dancer.

“Flip a Coin” features Carol in two different timelines, the first of which takes place on Parents Weekend during Beth’s freshman year of college, which ensues Carol’s decision to cease tuition payments to her daughter’s dance academy after she struggles to keep up in the wake of her father’s death. Carol meets her future son-in-law Randall (Sterling K. Brown) and his mother Rebecca (Mandy Moore), with the latter of whom she connects over widowhood. As Rebecca is still in the thick of mourning her husband Jack’s (Milo Ventimiglia) death, Carol offers advice on how to move forward in life. Despite an enjoyable chat with the grieving mother, Carol tells Beth she’s better off without Randall, whom she deems too grief-stricken to provide her daughter with sufficient support.

Jump ahead to present day, Randall and Beth are preparing for the grand opening of Beth’s dance studio, for which Carol comes to town. A foul-smelling possum corpse inside the building, however, threatens the opening, which prompts a disagreement between Randall and Carol as to how to proceed: The former proposes restaging the event outside, while the latter suggests postponing it. Tired of tip-toeing around his mother-in-law, Randall goes through with his idea, explaining to Carol that he knows what’s best for his wife. During Beth’s introductory dance, Carol admits to Randall that, while always liking him, she failed to see the strong family man he would eventually become.

So, is fifth time the charm for Rashad? Let’s dive into the pros and cons.

SEESterling K. Brown (‘This Is Us, ‘Marvelous Mrs. Maisel’) reveals which TV show he wants to guest on next [EXCLUSIVE VIDEO INTERVIEW]

A 21-time nominee and three-time champ for acting, “This Is Us” has always been a vehicle for its performers, including Rashad. Even though her character isn’t the focal point of “Flip a Coin” like she was of “Our Little Island Girl,” Rashad leaves a lasting impression as she builds on the character she began crafting last year. Throughout the episode, particularly in all flashback scenes, she subtly channels the emotional detachment that kicked in for Carol following Abe’s death, but imbues her with warmth at the same time. She thoroughly wears Carol’s grief on her face instead of covering it up, pursuant to how, despite managing to move forward in life, Carol has never stopped memorializing her late husband. In her final scene, Rashad has a tender moment opposite Brown when Carol excuses her doubts about Randall, which is a great build on her aforementioned scene with Watson in her 2019 submission.

With “This Is Us,” Emmy voters have sometimes been behind the curve, rewarding Ron Cephas Jones not for his supporting turn in the debut season but his guest turn in the second (in which he only appears in brief flashbacks), and taking until the third year to finally include Moore and Chris Sullivan as nominees – and yes, in the former’s case that’s a year after “Super Bowl Sunday.” If this trend continues, Rashad is primed to benefit, her overdue status having only gained prominence since last year. Even defending champ Jones was left stunned upon hearing that the actress – who earned her other three bids for “The Cosby Show” in Best Comedy Actress (1985-86) and “A Raisin in the Sun” in Best Movie/Mini Actress (2008) – had never won an Emmy.

SEESterling K. Brown (‘This Is Us’): Emmys 2020 episode submission revealed

If overdue narratives factor into the race, Rashad will have to duke it out with another Primetime Emmy-less thespian, Laverne Cox, who just accrued her fourth nom for Netflix’s “Orange Is the New Black.” Also nominated is “How to Get Away with Murder’s” Cicely Tyson, who, despite having three Emmy victories under her belt, has never triumphed for the ABC legal thriller. Now on her fifth bid (all five of which are for “Murder”), the legendary actress is the most nominated performer in this category and could snatch the title as the most shortlisted performer without a win – which she currently shares with Diana Rigg – if she doesn’t prevail this year. Cox and Tyson could have a leg up over Rashad since they’re on their final tries for their now-concluded series, while Rashad could reprise her role in future installments of “This Is Us.”

Despite bagging five citations, the NBC series not only dipped in acting bids, going from seven last year to three this year, but missed out on a Best Drama Series nom for the first time. The last time a performer from a non-nominated series won this category was in 2015, when “The Americans’” Margo Martindale ascended the podium. Cox and Tyson’s shows have littler support than “This Is Us” – they are their show’s only nomination – but the category is rounded out by three actresses from Best Drama Series nominees: “Handmaid’s’” Alexis Bledel and “Successions’” Jones and Harriet Walter. While 2017’s champ Bledel could benefit from “Handmaid’s” having won this category for three straight years (2018’s victor being Samira Wiley), either one of Jones or Walter could be swept up if drama series front-runner “Succession” steamrolls.