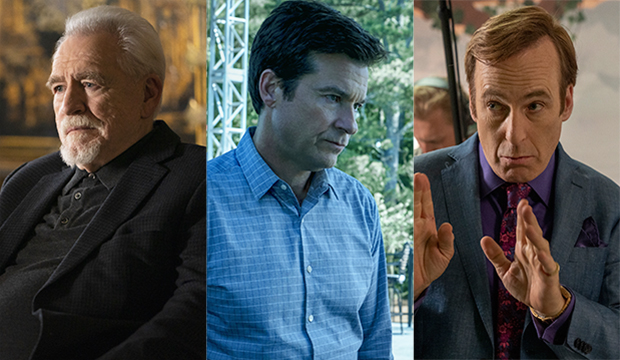 New decade, new trend? For the past nine years, the Best Drama Actor Emmy has gone to someone from a first-year show or a final-year show, but if our early predictions are correct, that pattern will stop this year.

Our current predicted top six are Brian Cox (“Succession”), Jason Bateman (“Ozark”), Bob Odenkirk (“Better Call Saul”), Jeremy Strong (“Succession”), Porter and Brown. None of these guys fit the “first or last” mold. “Succession” and “Pose” are contending for their sophomore installments, “Ozark’s” third season arrives on Netflix on March 27, “This Is Us” is in the middle of its fourth season, and “Better Call Saul” kicked off its penultimate fifth season last month.

In fact, the first potential nominee who fits under this label is in eighth place in our odds: Ben Mendelsohn from “The Outsider.” “The Crown” star Tobias Menzies is in seventh, and while this is his first of two years on the royal drama, it’s the show’s third season.

Bateman, Odenkirk, Porter (duh) and Brown were all nominated last year, alongside Kit Harington (“Game of Thrones”) and Brown’s co-star Milo Ventimiglia, who, like Brown, has never missed for “This Is Us.” With “Game of Thrones” over, there’s only one opening in this category — a lot different from last year when there were three vacated slots from 2018, thanks to Rhys and the ineligible Ed Harris and Jeffrey Wright with “Westworld” taking a breather.

“Succession,” the Golden Globe, Critics’ Choice and Producers Guild of America Award winner, is the hot show of the moment (even though it hasn’t been on since October and won’t be back for a while since production on Season 3 is delayed due to the coronavirus outbreak) and the odds-on Best Drama Series favorite, so it’s not inconceivable for it to carry two lead actors to nominations. “Succession” has yet to earn an acting Emmy bid or a Screen Actors Guild Award nomination, and Cox and Strong have never been nominated against each other at any awards show.

The winter awards did not offer a solid frontrunner in this race, let alone a new face or an old sentimental darling (well, one whose show is still Emmy eligible at least), as Cox and Strong split the Globe and Critics’ Choice Award, and SAG, the only body with membership overlap with the TV academy, finally gave “Game of Thrones” a non-stunt win for Peter Dinklage.