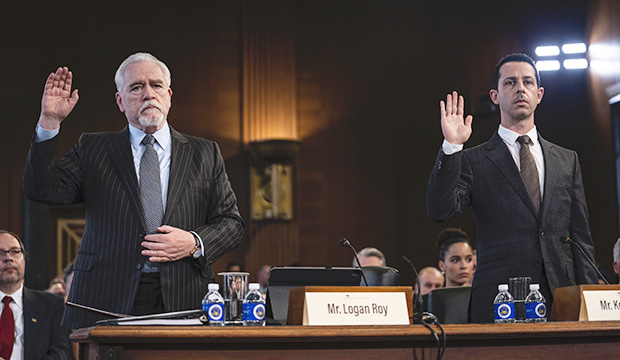 Just like on “Succession,” the Number One Boy got the better of Logan Roy (for now). Jeremy Strong beat his TV father Brian Cox for the Best Drama Actor Emmy on Sunday, becoming just the sixth person to topple a co-star in the category.

Flanders and Daniels are the only co-stars to have notched a victory over the other, while Franz is the only one to be nominated against and beat two co-stars en route to his record four statuettes.

Strong and Cox were the third duo in the last four years to be shortlisted together, following “This Is Us'” three-peat bids for Brown and Ventimiglia from 2017-19, and “Westworld” doubling up for Ed Harris and Jeffrey Wright in 2018.

Cox was the favorite for the majority of the season, but the Golden Globe champ lost ground and was eventually overtaken in our odds by Strong, who won the Critics’ Choice Award, last week. The pair had never faced off at an awards show until now. This was Strong’s first nomination and win. Cox previously won for the TNT miniseries “Nuremberg.”

Here are the co-star nominees from the same show with winners denoted.