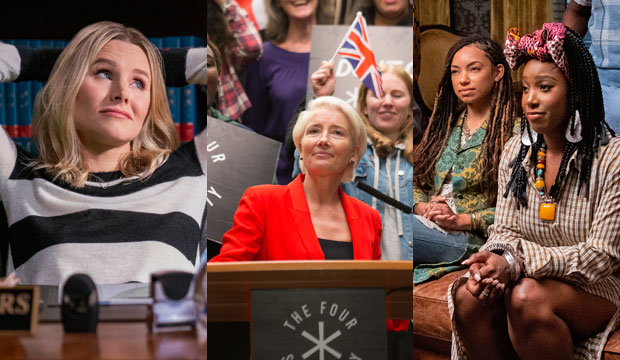 Amid the coronavirus pandemic, we can hardly go to the movies and Broadway shows have been shut down. But there’s always TV from a safe social distance. For Emmy voters in particular whose productions might have shuttered in the last week, here are six underrated shows you might be sleeping on that I think deserve your time while in isolation.

“Dear White People” (Netflix) — Justin Simien‘s series is all about solidarity. Its third season dropped last August while the television academy was preoccupied with voting for winners for the 2018-2019 season. It’s funny, incisive and empathetic, and its cast of Black undergraduates seeking to build community in a world that often feels hostile to them is comforting at times like these.

“Mindhunter” (Netflix) — Or if you’re in a dark mood and want to steer into that skid, try this one on for size. Despite its strong pedigree — including David Fincher as a director and executive producer — this show was skunked by the Emmys in 2018 except for Cameron Britton‘s brilliant recurring turn as serial killer Ed Kemper. The gripping second season followed the confounding Atlanta child murders and how politics can sometimes get in the way of public safety — which hits especially close to home these days.

“Mr. Robot” (USA) — An Emmy darling in its first season, this show fell off the radar after that, but its fourth and final season last fall wrapped up this byzantine conspiracy story as well as we could’ve hoped for. It’s all about a revolution against the powerful, moneyed interests that run the world, but in addition to the wish fulfillment of seeing oligarchs get their comeuppance, the show’s ultimate revolution was more personal, with hacker Elliot (Rami Malek) coming to terms with himself as much as with the world around him.

“Star Trek: Picard” (CBS All Access) — It may be too early to tell if this show is underrated, per se, but Patrick Stewart was never nominated for this performance when he was on “Star Trek: The Next Generation,” and the show itself was only nominated for Best Drama Series once for its final season. “Picard” is a different animal, looser, scrappier and more action-packed, but the man at the center of it is as dutiful and committed as ever, and this latest adventure is the best “Star Trek” has been in decades.

SEEJump into today for your 1st Emmy Awards 2020 nominations predictions

“Veronica Mars” (Hulu) — You can’t keep Ronnie down. After three underappreciated seasons on UPN and the CW, the teen detective got a Kickstarter movie in 2014 and a whole new season on Hulu in 2019. You can also watch the original seasons one through three on Hulu as well to get a better sense of what you’ve been missing all this time: Kristen Bell as one of the most indelible TV characters of the 21st century.

“Years and Years” (HBO) — This might be an especially tough sit right now since Russell T. Davies‘s limited series dramatizes how one family copes through a near-future of social, political and economic unrest as world governance descends into nationalism and authoritarianism. But it’s a deeply cathartic and ultimately hopeful series with outstanding performances all around. While socially isolated, it may make you feel less alone.