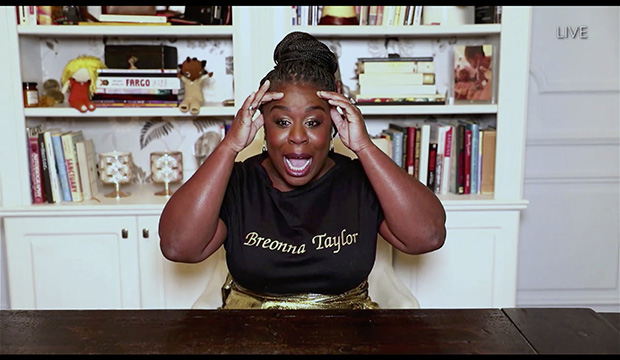 At the 2015 Emmys, host Andy Samberg joked that he always knew Uzo Aduba would be the new Ed Asner. His theory was confirmed later that evening when she joined him as the only two actors to win Emmys in comedy and drama for the same role. And now she’s continuing to follow in not only his footsteps but that of his “Mary Tyler Moore Show” co-star Cloris Leachman as well, becoming the third performer to win Emmys for acting in comedy, drama and limited series/TV movie.

Last week, Aduba nabbed the Best Movie/Limited Supporting Actress statuette for her performance as Shirley Chisholm in the FX miniseries “Mrs. America.” She took home her first Emmy in Best Comedy Guest Actress for her turn as Crazy Eyes on “Orange Is the New Black” in 2014. The following year, after the Netflix series was moved to drama, she won for the same role in Best Drama Supporting Actress.

That second win put her in Asner’s level as the only people to garner an Emmy in the comedy and drama categories for the same role. He won three awards for Best Comedy Supporting Actor for his performance as Lou Grant on “The Mary Tyler Moore Show” in 1971-72 and ’75, as well as two more for Best Drama Actor in 1978 and ’80 when he reprised that role on the dramatic spin-off “Lou Grant.”

A seven-time Emmy champ, Asner has two more victories in now-defunct categories: Best Lead Actor for a Single Appearance in a Drama or Comedy Series for “Rich Man, Poor Man” in 1976 and Best Single Performance by a Supporting Actor in a Comedy or Drama Series for “Roots” in 1977. Both shows were miniseries, making him the first performer to win Emmys across the three genres.

Leachman joined him in 1998 when she won Best Drama Guest Actress for “Promised Land.” In 1973, Leachman scored the first of her record eight Primetime Emmys in the category of Best Movie/Limited Actress (under the title of Best Single Performance by an Actress in a Leading Role) for the TV movie “A Brand New Life.”

The next two years, she won Best Comedy Supporting Actress and the now-defunct Best Single Performance by a Supporting Actress in a Comedy or Drama Series for “The Mary Tyler Moore Show,” the second of which was in a tie with Zohra Lampert for “Kojak”. She added two more trophies in comedy in 2002 and 2006, winning Best Comedy Guest Actress for her recurring role on “Malcolm in the Middle.” (She has two more Emmys as a variety performer for “Cher” in 1975 and the “Screen Actors Guild 50th Anniversary Celebration” in 1984, so she’s really covered all the genres.)

Aduba wasn’t the only performer this year who had the opportunity to complete the genre trifecta. Sterling K. Brown was up for Best Comedy Supporting Actor for his role on the third season of Amazon Prime Video’s “The Marvelous Mrs. Maisel,” but ended up losing to Dan Levy for “Schitt’s Creek.” Brown had previously won Best Movie/Limited Supporting Actor in 2016 for his breakout role as Christopher Darden on “The People v. O.J. Simpson” and Best Drama Actor the following year for the first season of “This is Us.”

Meanwhile, Laura Linney was nominated for Best Drama Actress for her role on the third season of Netflix’s “Ozark.” Despite being the odds-on favorite to win, she lost to Zendaya for “Euphoria.” Linney had previously won Best Comedy Guest Actress in 2004 for her appearance on “Frasier,” as well as Best Movie/Limited Actress three times, for “Wild Iris” in 2002, “John Adams” in 2008 and “The Big C: Hereafter” in 2013. There’s one more season of “Ozark” that will be split into two parts, so she has two more chances to enter this club.