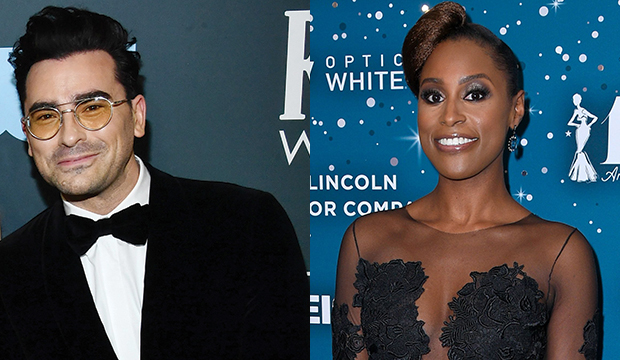 As expected, the Primetime Emmy Awards are going virtual in September due to COVID-19. It’ll be weird for everyone around, not the least of which the nominees, who can’t reunite with their coworkers to celebrate, and will have to find out if they won (or lost) on a Zoom call.

“On our side, we can’t help but think how on brand of our show it is to have this kind of recognition in our last season and then not be able to see each other,” “Schitt’s Creek” creator and star Dan Levy joked Wednesday on a virtual panel for his new HBO special “Coastal Elites” during the CTAM summer press tour. “It does feel very in line with something we would write for our characters.”

“Schitt’s Creek” nabbed 15 nominations, including Best Comedy Series and all four regular acting categories, with Levy in comedy supporting actor. He also scored writing and directing bids for the series finale. “I think particularly because this is our last [season] and as the showrunner, I feel so much pride. As a whole, to have so many members of that team recognized was the gift. That was the big thing for us. And the award show, whatever it may be, will obviously be kind of fun. Or not,” he deadpanned. “Who knows?”

No matter what, the “Schitt’s” crew plans to “have a good time.” Levy’s father, Eugene Levy, who’s up for comedy actor, is floating a backyard get-together — socially distanced, of course. “I think my dad is saying we might just put a tent up in our backyard here in Toronto and have some people over and be 6 feet apart, share a toast or something. I don’t know,” he shared. “It all sounds very wild.”

His “Coastal Elites” co-star Issa Rae is also planning a “safe party.” Her brainchild, “Insecure,” broke out with eight bids, including comedy series and actress for her, after just three total nominations prior to this year. “I’m excited to see the [ingenuity] of the awards show, [how] they’re gonna make it happen,” she said. “I’m gonna have some sort of safe party anyway. I feel like I have to.”

Last week, Team “Insecure” celebrated their nominations on Zoom. “We have a big year and it’s very exciting, but we can’t see each other. We drank and Zoomed and toast[ed] to the camera and then abruptly left to our respective corners,” Rae recalled. “It was just kind of anticlimactic, but it’s an honor.”

“Coastal Elites” also stars Bette Midler, who received a comedy guest actress nomination for “The Politician,” her ninth career bid. The three-time Emmy champ “can’t even wrap my head” around the idea of a virtual ceremony.

After nominations last Tuesday, producers, including host Jimmy Kimmel, sent a letter to nominees informing them of the virtual show, and vowed to work closely with the nominees and technicians to pull this off.

A pandemic satire, “Coastal Elites” will premiere Saturday, Sept. 12, at 8/7c on HBO. Written by Paul Rudnick (“Sister Act”) and directed by Jay Roach (“Game Change”), it was originally conceived as a play but was then adapted to a socially distanced 90-minute special, following a group of people from New York and Los Angeles as they cope with politics and the pandemic. Filming took place earlier this summer under quarantine. The cast also includes Sarah Paulson and Kaitlyn Dever.