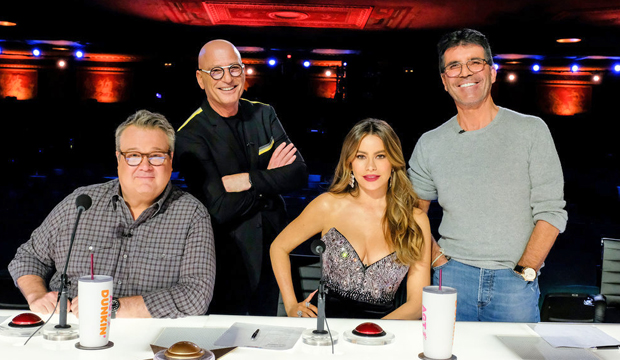 Since Heidi Klum is still out sick (thankfully not from COVID-19), guest judge Eric Stonestreet has temporarily joined Sofia Vergara, Howie Mandel and Simon Cowell at the “America’s Got Talent” judging panel. During the Tuesday, June 30 episode, Eric drew laughs by joking that he’s been “waiting to replace Heidi in this business for a long time.” Heidi’s fever has taken her out of the commission for the time being, but have no fear, “AGT” fans, she will be back when the Judge Cuts start up on July 28.

“All right guys, Heidi is still under the weather and thank you so much Eric for being here,” Terry stated at the beginning of Tuesday’s show. Backstage, many of the acts including cheer squad Wildcats were preparing for their big moment on the stage.

SEETexas cheer team auditions for ‘America’s Got Talent’ without an audience: ‘We’re gonna be cheering for you,’ says Sofia Vergara [WATCH]

Eric deadpanned, “I’ve been waiting to replace Heidi in this business for a long time. I’ve followed her around. We auditioned for a lot of the same things and I finally, finally get it.”

Simon changed the subject to address the lack of a studio audience for the first time in the reality TV show’s 15-year history. “Without the audience feedback, it is gonna be tough, I’m not gonna lie,” he noted as he looked out on all the empty seats.

Terry thought the red buzzer was gonna be “extra loud” in that atmosphere, so Simon pressed it just to see what it sounded like in an empty auditorium. Everyone backstage reacted in shock to hearing the annoying buzzer.

“That kills any virus,” joked Sofia with perfect comedy timing.

Eric is a two-time Emmy winner for his breakout role as Cameron Tucker on “Modern Family” (2010, 2012). He was also nominated for three Golden Globes (2011-13). ABC’s long-running comedy series said goodbye in April after 11 years on the air. Cam was last seen on an airplane with his husband Mitchell Pritchett (Jesse Tyler Ferguson) and their daughter Lily (Aubrey Anderson-Emmons) as they headed to their new lives in Missouri.

Heidi has been a judge on “America’s Got Talent” since 2013, when she and Mel B replaced a single judge, Sharon Osbourne, on the panel. The German judge took a year off in 2019, but returned for the current cycle when one-and-done panelists Gabrielle Union and Julianne Hough didn’t end up working out. Heidi has also appeared on both seasons of the spin-off series “AGT: The Champions,” which welcomes popular acts from all around the world to compete against each other for the ultimate title.