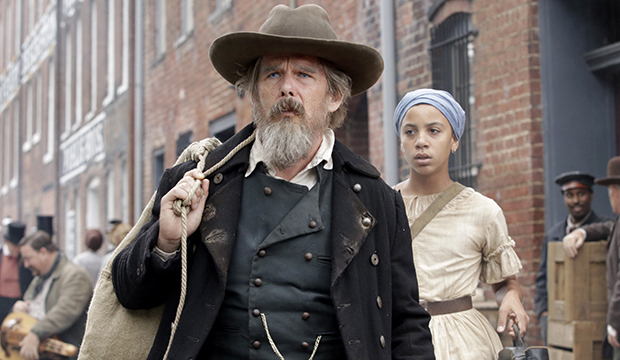 The Golden Globes have made a habit of overlooking Ethan Hawke, recognizing the four-time Oscar nominee just once for his supporting role in “Boyhood” (2014). But Hawke seems to be a shoo-in this year for playing John Brown, a wild-eyed abolitionist leading a misfit brigade of soldiers in Showtime’s limited series “The Good Lord Bird.” According to our odds, Hawke is on track to earn his second Golden Globe nomination and potentially win.

Emmy champ Mark Ruffalo is the odds-on favorite to take home the Best TV Movie/Limited Series Actor Globe for his performance in “I Know This Much Is True,” but Hawke is within striking distance in second place. The two actors have battled it out once before at the Globes when Hawke was up for “Boyhood” and Ruffalo received a bid for “Foxcatcher,” but they were taken down by eventual Oscar winner J.K. Simmons for “Whiplash.” Rounding out the top five slots in our predictions this year are Paul Mescal (“Normal People”), Hugh Grant (“The Undoing”) and Hugh Jackman (“Bad Education”).

Hawke, who also helped adapt James McBride‘s 2013 novel for the screen, has received some of the best acting reviews of his career for “The Good Lord Bird.” Jacob Oller (Paste) writes, “[Hawke] blows through scenes like a cannon shot; he’s a fury of sound and saliva, crafting warm charisma through pure power, speed and volume.” Sonia Saraiya (Vanity Fair) says, “Hawke is beyond great; he’s incandescent,” and Brian Tallerico (RogerEbert.com) calls his performance “truly remarkable.”

Hawke was most notably snubbed by the Globes for his performance in 2001’s “Training Day” opposite eventual Academy Award winner Denzel Washington. Despite being ignored by the Hollywood Foreign Press, he went on to earn SAG and Oscar nominations for his role as Detective Jake Hoyt in the crime thriller. Hawke was also left off the ballot for his Oscar-nominated screenplays for “Before Sunset” (2004) and “Before Midnight” (2013). His most recent snub was two years ago for his turn as Pastor Ernst Toller “First Reformed,” for which he won a host of critics awards.

Last year, Globe voters picked Russell Crowe as their favorite actor a TV movie/limited series for playing former FOX News CEO Roger Ailes in another Showtime program, “The Loudest Voice.” Should Hawke prevail, he will be the fourth winner from a Showtime project in this category, following Jack Lemmon in “Inherit the Wind” (1999), Brian Dennehy in “Death of a Salesman” (2000) and Crowe. 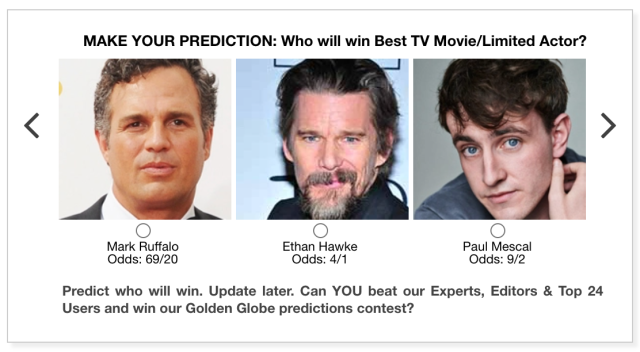