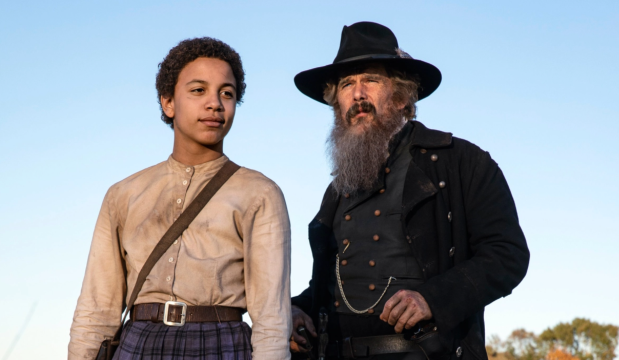 Oscar-nominated actor and writer Ethan Hawke is poised to contend for kudos for his television work with the recently concluded “The Good Lord Bird.” He also served as a co-writer and executive producer of this Showtime limited series. Hawke portrays the preacher and abolitionist, John Brown, in his adaptation of the acclaimed novel by James McBride.

The story is told from the perspective of a slave, Henry (Joshua Caleb Johnson), who ends up in Brown’s gang and is mistaken for being a girl. Brown lead an armed raid against the U.S. Armory in Harpers Ferry, Virginia (now in West Virginia) in 1859 in the hopes of starting an uprising of American slaves against the institution.  While the raid was unsuccessful (with Brown ultimately being executed for treason and murder), many historians view Brown’s actions as a key moment in the lead up to the American Civil War.

The show hinges on Hawke’s performance and he nails every aspect of it. He captures Brown’s sincere convictions but doesn’t seek to make him into a martyr or a saint. His performance gives us a lot to think about in terms of citizens rising up at what they view to be the moral failings of our government.

It’s a stroke of genius that the limited series, combined with the way Hawke portrays Brown, doesn’t seek to justify what Brown did and lets us to come to our own conclusions on that matter.  Heeven allows Brown’s sanctimonious preaching about what’s best for the enslaved Black people to come off as completely tone-deaf at several occasions.

Hawke’s performance is central to the tone of the series, including its frequent darkly comedic moments. This is best shown through the scenes in which Brown is leading pre-meal prayers that drone on and on much to the chagrin of everyone else present.

The critical acclaim that Hawke has been receiving could well lead to his being recognized at the Golden Globes, SAG Awards and Critics’ Choice TV Awards. Daniel D’Addario at Variety proclaims, “Hawke nails Brown’s passion, and his impatience with those who don’t share it.” Ben Travers, from IndieWire, says, “For as commanding as John Brown is under Hawke’s ferocious turn, his growling, raspy, and megaphoned voice never overwhelms the men and women he’s hellbent on setting free.” And Vanity Fair’s Sonia Saraiya writes, “Hawke is beyond great; he is incandescent…he transforms into the legendary and reviled John Brown, the visionary and/or fool who sparked the Civil War.”