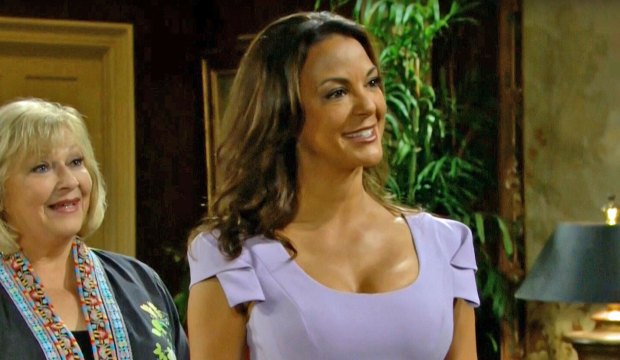 It has been almost three decades since Eva LaRue made a name for herself in daytime as Dr. Maria Santos on “All My Children.” But this year she could win her very first Daytime Emmy for a different role: Celeste Rosales on “The Young and the Restless.” She’s nominated for Best Guest Performer for her stint on the CBS soap. Do you think she’s due to take home the gold?

LaRue played Maria on “AMC” off and on between 1993 and 2011 and earned two Emmy nominations: Best Supporting Actress in 1997 (she lost to Michelle Staffford for “Y&R”) and then Best Original Song in 2004 for co-writing “Dance Again with You” for “AMC.” But those were her only bids before now.

She recently described to soap journalist Michael Fairman what scenes she submitted for her Emmy reel that earned her the nomination (and potentially the win): “I submitted a scene with Peter Bergman [who plays Jack] … who is amazing, warm and open and such a great actor. Then I submitted a scene with my on-screen daughter Sasha Calle [Lola] – I love that girl, and another one with Michelle Stafford [Phyllis] who has also been my great friend for a couple of decades. The other scene I put on my reel was with me and Jordi Vilasuso [Rey] who I also adore. He is awesome and such a sweetheart. I only had two months worth of material to draw upon. So I just submitted the scenes that I liked the best, and they all were within story, and all made sense.”

And there’s two chances for an “AMC” alum to prevail in this category. She’s nominated against her former co-star Michael E. Knight, best known for his two-time Emmy-winning role as Tad Martin on “AMC,” who joined “General Hospital” in 2019 as Martin Gray. Rounding out the category are two other “Y&R” guests — Jeffrey Vincent Parise and Elissa Kapneck — and Chrishell Stause for “Days of Our Lives.” Who do you think will prevail?

the Daytime Emmys now; change them until June 26[/pmc-related-link]