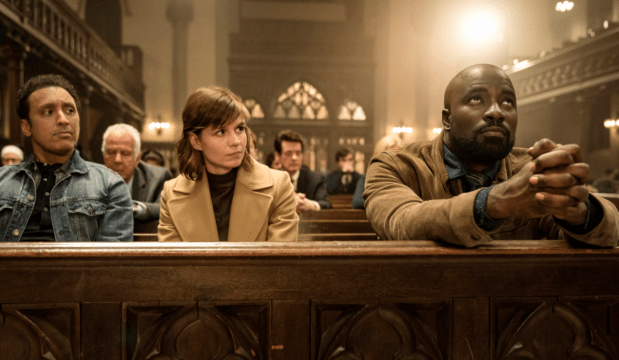 After shepherding “The Good Wife,” one of broadcast’s last prestige dramas, for seven seasons, Michelle King and Robert King returned to CBS last fall with “Evil,” another genre-defying network procedural. The Emmy-nominated duo, who also currently lead CBS All Access’ “The Good Fight” and the upcoming Showtime miniseries “Your Honor,” based the series on their own debates about science and religion: Katja Herbers and Mike Colter play an unlikely investigative team of psychologist and seminarian, respectively, who try to decipher if acts of evil result from psychosis or demonic possession. After airing weekly on CBS last fall and streaming exclusively on CBS All Access, the entire first season will stream on Netflix beginning October 1.

Typical of the Kings, “Evil” is tremendously ambitious and daring, working within and beyond the confines of broadcast drama. In between its harrowing exorcism scenes, the series grapples with topical social issues, including racial disparities in healthcare, the enduring trauma of slavery, and toxic white masculinity. Its endlessly entertaining mix of horror and social critique garnered the show critical acclaim: the first season scored an impressive 91% on Rotten Tomatoes and a 76 on Metacritic, and it landed on a number of Top 10 lists for 2019, including The New Yorker, NPR, and TVLine.

Despite all of this praise, “Evil” failed to scare up any significant awards recognition, earning just a single Critics’ Choice bid for Mike Colter. Its awards prospects could change for its upcoming second season, though, thanks to Netflix. Its arrival on the streaming service will not only bring to “Evil” a new, larger audience beyond the average six million viewers it nabbed per week on CBS, but it could also help the show overcome the broadcast bias at the Emmys that only “The Good Wife” and “This Is Us” could recently beat with bids for Best Drama Series.

If “Evil” makes a splash at the upcoming winter awards and the 2021 Emmys, it wouldn’t be the first time Netflix amplified an unsung series to Emmy victory. “Breaking Bad” famously saw a notable boost after Netflix brought its first three seasons to a wider audience, catapulting the series from 16 nominations for its first three years to 42 more for its final three cycles, including two Best Drama Series trophies. More recently, Netflix supercharged the CBC / Pop TV sitcom “Schitt’s Creek” from four straight years of Emmy snubs to four surprise nominations in its fifth season and a historical sweep of all seven Comedy categories this year.

The success of “Breaking Bad” and “Schitt’s Creek” seems to be an exception, though. Other dramas that Netflix streams like “The Blacklist” (NBC) and “Madam Secretary” (CBS) have never broken through in the above-the-line Emmy categories. Netflix alone might not push “Evil” over the edge, but it helps that many of this year’s Drama Series nominees might not air before the 2021 eligibility deadline. “The Crown” and “The Mandalorian” will definitely air new episodes and “The Handmaid’s Tale” is resuming production soon, but “Better Call Saul,” “Killing Eve,” “Ozark,” “Stranger Things,” and “Succession” have yet to return to set due to COVID-19. With “Evil” set to debut its second season around November, it has a unique opportunity to take advantage of those major gaps in the Drama Series line-up.