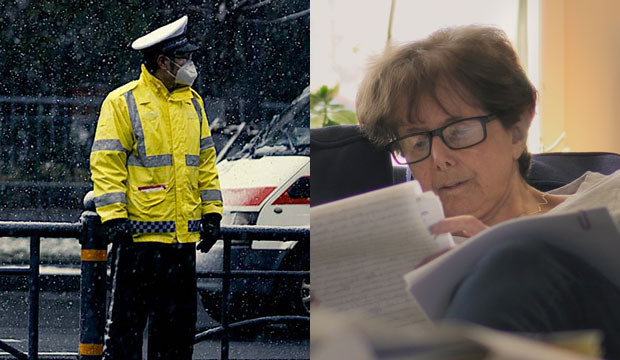 Like tumbling autumn leaves, fall film festivals in Toronto, New York and more have added to the pile of must-see documentaries that could figure in the 2021 Oscar race for Best Documentary Feature.

Possible contenders include Oscar winner Errol Morris‘s yet-untitled doc for Showtime about LSD advocate Timothy Leary. Also, Lisa Cortes and Liz Garbus‘s voter suppression film, “All In: The Fight for Democracy,” zeroes in on Stacey Abrams, the 2018 Georgia gubernatorial election and the continued threat to our elections; it just dropped on Amazon Prime. Oscar-nominated “Fire at Sea” director Gianfranco Rosi showed his latest effort, “Notturno,” in Venice and Toronto; shot across three years in Middle East locales near war zones, the doc focuses on how people from the region try to reclaim their everyday lives. It lacks a U.S. distributor.

Sam Pollard showed his IFC Films release “MLK/ FBI”in Toronto and New York, chronicling the campaign of surveillance against the civil rights leader by the federal government. As for Dawn Porter, who already released her “John Lewis: Good Trouble” through Magnolia, has a second documentary that just opened in theaters on September 18: “The Way I See It,” a portrait of White House photographer Pete Souza released by Focus Features.

Other notable titles that could make the Oscars shortlist might also include these hopefuls that cover a range of topics from COVID-19, to elder care, to cold-bl

“76 Days” — This TIFF title (pictured above, left) from directors Hao Wu, Weixi Chen and Anonymous provides a record of life inside Wuhan, China, which was ground zero for the outbreak of COVID-19. The film shows how overwhelmed hospital workers raced between patients as the city of 11 million was forced into a lockdown that lasted two-and-a-half months. As of this writing it has not yet been acquired for distribution, but it’s likely to be a strong contender when it is. No U.S. distributor yet.

“Crazy, Not Insane” — This HBO-distributed doc directed by the prolific Oscar winner Alex Gibney (“Taxi to the Dark Side”) screened at Venice. It focuses on the research of psychiatrist Dr. Dorothy Otnow Lewis (pictured above, right), who specializes in the psychology of murderers.

“Totally Out of Control” — The prolific Gibney has a second doc, this one released by Neon, that will arrive in October. While other filmmakers struggled under the constraints of the pandemic, Gibney has been secretly filming for the past four months with co-directors Ophelia Harutyunyan and Suzanne Hilinger. This title digs into the White House’s failed response to the global health crisis and how it could have been prevented, offering a harrowing portrait of Donald Trump‘s dereliction of presidential duty.

“Fireball: Visitors From Darker Worlds” — The ever-reliable Oscar nominee Werner Herzog (“Encounters at the End of the World”) reunites with University of Cambridge professor Clive Oppenheimer, who accompanied him previously for his 2016 volcano doc, “Into the Inferno.” This time the globe-trotting pair explore the meteors that have fallen to Earth, both old and new. The doc was shown at TIFF and will land on Apple TV+ this fall.

“The Mole Agent” — Filmmaker Maite Alberdi follows an 83-year-old retired private eye hired to go undercover in a Chilean nursing home to find evidence that the staff has been abusive to residents. But instead of intrigue and violence, this doc offers buckets of empathy for the lonely residents. The September release is available on various streaming sites such as iTunes and Google Play.