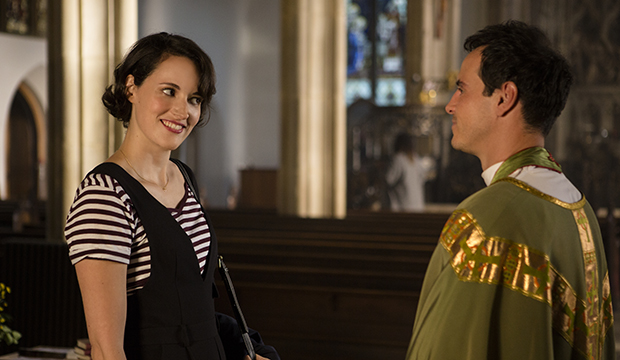 Ask any fan about the second season of “Fleabag” and the words “Hot Priest” are bound to tumble out of their mouths at some point. That would be Andrew Scott, the actor who portrayed the sinfully attractive man of the cloth who bewitched creator Phoebe Waller-Bridge‘s title character into a taboo sexual attraction.

The first season of the show that aired in 2016 was totally ignored by Emmy voters when it first streamed on Amazon. It could be that there was a lack of buzz at the time. But it could also be the lack of Scott in its storyline — at least that’s my theory and I’m sticking to it. As for Season 2, the voters compensated for its initial brush-off by bestowing “Fleabag” with 11 nominations including five for its actresses, including Waller-Bridge who won for lead comedy series actress, and four other ladies — Sian Clifford and Olivia Colman for their supporting roles and Kristin Scott Thomas and Fiona Shaw for their guest performances.

But somehow the TV academy foolishly ignored how important the Hot Priest’s contributions were to the show, sex symbol-wise and otherwise. However, let’s not cry for  Scott, who did get a supporting Golden Globe nomination and a Critics’ Choice Award for his efforts. The actor who was previously best known in the U.S. as the nefarious Jim Moriarty won a BAFTA for his work opposite Benedict Cumberbatch as Sherlock Holmes in “Sherlock,” which aired on PBS.

Since “Fleabag” became a phenom, Scott’s profile has been rising in a variety of projects. Last year he played Lieutenant Leslie in the Sam Mendes-directed World War I epic “1917.” On the small screen he appeared in an episode of the British sci-fi anthology series “Black Mirror” as a rideshare driver in London for the app Hitcher which focuses on the danger of social media as a distraction from reality. The show competes at the Emmys as a drama series this year, so Scott is eligible for consideration for acting as well.

He also played one half of a gay couple on Amazon’s anthology series “Modern Love.” He takes in a nomadic pregnant woman who will soon deliver a baby that they will adopt. When they realize that she has no place to live, she moves into their Manhattan apartment. Her somewhat irresponsible habits get on their nerves, but she and Scott’s character finally break the ice by comparing the differences in their lifestyles.

And if that weren’t enough, Scott also had a role in HBO’s “His Dark Materials,” based on Philip Pullman‘s novel trilogy. He plays Colonel John Parry, the father of one of the main protagonists and a famous explorer and marine major who vanished during an expedition to the Arctic when his son was an infant.

As for Scott’s future, he is already signed up to star in Showtime’s “Ripley,” based on Patricia Highsmith‘s novels about a scam artist hired by a rich man to bring his playboy son home, which leads to deceit, fraud and murder. Yes, trophies are nice, but being one of the most wanted actors around isn’t a bad thing either.