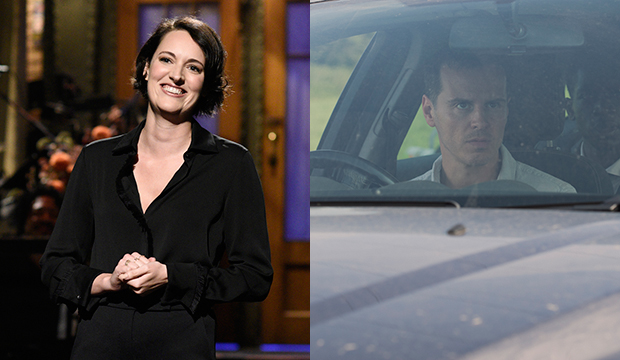 Fleabag (Phoebe Waller-Bridge) and Hot Priest (Andrew Scott) didn’t live happily ever after on “Fleabag,” but their portrayers could get a happy ending together at the Creative Arts Emmys in September. Both are up for guest awards — she for comedy guest actress for “Saturday Night Live“; he, drama guest actor for “Black Mirror” — so now the question is if voters will kneel to both of them.

Both could benefit from any “Fleabag” afterglow from last year when the series bagged six Emmys, including three for Waller-Bridge for Best Comedy Series, Best Comedy Actress and Best Comedy Writing. Thirteen days later, she hosted the second episode of “SNL’s” 45th season — and brought her new friends along for the ride.

Waller-Bridge, who’s also nominated as executive producer of drama series contender “Killing Eve,” is in third place in our odds, trailing Wanda Sykes (“The Marvelous Mrs. Maisel”) and Maya Rudolph (“The Good Place”), respectively. But Rudolph could split the vote with herself as she’s also nominated for playing newly minted vice presidential candidate Sen. Kamala Harris on “SNL,” for which she is in sixth place behind Angela Bassett (“A Black Lady Sketch Show”) in fourth and Bette Midler (“The Politician”) in fifth. Sykes hails from a show that won four acting awards last year, including comedy guest actress for Jane Lynch, but Waller-Bridge can look to the fact that “SNL” has done very well in the guest categories since it was allowed to compete there in 2009  — it’s won five times in each category, including three in a row in actress from 2016-18.

Scott was shockingly not among “Fleabag’s” 11 nominations last year despite being the swoon-worthy fan favorite, so this is the perfect time for him to cash in on an Emmy IOU for his turn as the rideshare driver of your nightmares in the “Black Mirror” episode “Smithereens” (after years of competing as a TV movie, the anthology series was forced to submit in drama since “Smithereens” does not meet the new 75-minute runtime requirement). Scott’s “Fleabag” snub so flummoxed Bradley Whitford that he was talking about it weeks after the Creative Arts Emmys with Seth Meyers, who also couldn’t believe there was no Emmy love for Hot Priest. Well, now Whitford can vote for Hot Priest to win the very award he won last year (for “The Handmaid’s Tale”).

After the genre switch, Scott quickly shot up our nomination odds and is currently predicted to win drama guest actor with a pretty healthy lead over No. 2 James Cromwell (“Succession”) at 37/10 to 9/2. Giancarlo Esposito (“The Mandalorian”) is in third, followed by Jason Bateman (“The Outsider”), Martin Short (“The Morning Show”) and 2018 champ Ron Cephas Jones (“This Is Us”).

The guest awards will be handed out on Saturday, Sept. 19, the last of five days of virtual Creative Arts ceremonies (the Saturday ceremony will air live on FXX at 8 p.m. ET / 5 p.m. PT, while the first four will be streamed on Emmys.com). So if this reunion comes to pass, we will sadly be robbed of cute backstage photos. 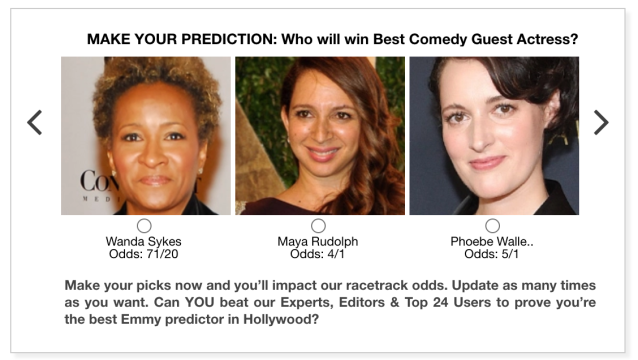