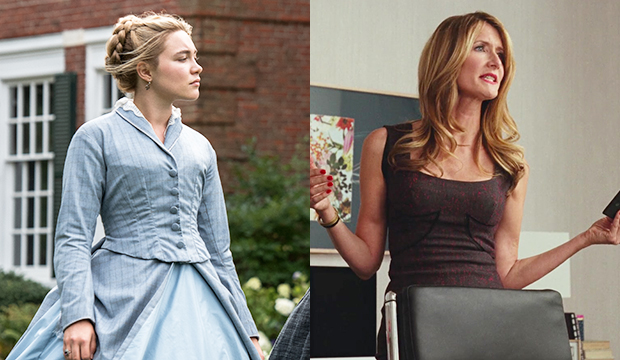 Sunday’s BAFTA Awards is the final stop for the four acting frontrunners before they most likely complete their 20/20 sweep of the four precursors and the Oscars. That means it’s the last chance for any of their Oscar competition to sneak out a win and gain a smidgen of momentum before the big show — smack dab in the middle of Oscar voting, no less. And per our odds, Laura Dern (“Marriage Story”) is the most vulnerable to a BAFTA upset at the hands of her “Little Women” daughter Florence Pugh.

While a few brave pundits calling BAFTA losses for Joaquin Phoenix (“Joker”), Renee Zellweger (“Judy”) and Brad Pitt (“Once Upon a Time in Hollywood”), the closest race is in supporting actress, which is still not that close at all; Dern leads with 16/5 odds to 19/5 for Pugh. But Pugh has three Experts, two Editors and four of our top 24 users going out on a limb for her.

It’s certainly not an unreasonable prediction. A Rising Star BAFTA nominee two years ago, Pugh had a great 2019 between “Little Women,” “Midsommar” and “Fighting with My Family.” She’s poised to break out even bigger this year with her role in the upcoming “Black Widow,” opposite BAFTA and Oscar rival Scarlett Johansson (“Jojo Rabbit”). Oh, and she’s British. BAFTA voters have at times chosen one of their homegrown stars. Three years ago, Dev Patel took Best Supporting Actor honors for “Lion” over eventual Oscar champ Mahershala Ali (“Moonlight”). Last year, we all knew Olivia Colman would snag the Best Actress BAFTA for “The Favourite” over presumed Oscar favorite Glenn Close (“The Wife”), and in this case, Colman did win the Oscar.

SEE SAG Awards vs. Oscars: How often do the 4 acting winners match?

In the supporting actress category, Thandie Newton (2005’s “Crash”), Helena Bonham Carter (2010’s “The King’s Speech”) and Kate Winslet (2015’s “Steve  Jobs”) triumphed at BAFTA despite not being Oscar frontrunners — Newton wasn’t even nominated. The asterisk here, though, is that they weren’t competing against the frontrunners: Rachel Weisz was nominated in lead for “The Constant Gardener” (2005); Melissa Leo was snubbed completely for “The Fighter” (2010); and Alicia Vikander was also bumped up to lead for “The Danish Girl” (2015), with a supporting bid for “Ex Machina.” Weisz, Leo and Vikander, of course, won the supporting Oscar.

Unfortunately for Pugh, she is up against the favorite in Dern, who’s been steamrolling through the season and has morphed into the default way to recognize “Marriage Story,” which hasn’t gained traction in any other category. So while a Pugh prize is certainly not out of the realm of possibility, this will likely play out the way it did two years ago, when some similarly felt Sally Hawkins (“The Shape of Water”) had home-field advantage to upset, but BAFTA ended up going with frontrunner Frances McDormand (“Three Billboards Outside Ebbing, Missouri”).

Rounding out our predictions are Margot Robbie in third place for “Bombshell,” Johansson in fourth and Robbie again in fifth for “Once Upon a Time in Hollywood.”